When I was a young teenager, my parents used to schlep me up and down the East Coast of the United States (at my pleading) to Richmond, VA; Washington, DC; Baltimore, MD; Philadelphia, PA and New York so I could attend Israeli Festivals and Showcases. They got to visit with family and friends, and I got to have fun. It was at an Israeli Showcase in 1974 that I first encountered Tsofim, the Israeli Scouts. I corresponded regularly with four of them for years, seeing two Scouts every year when they visited the States.

The Tsofim I was friends with fostered my love of Israel and my desire to eventually make Aliyah. Elisheva and Ido eventually “graduated” from the Scouts and entered the IDF. We were all counselors together at Camp Ramah in 1978, and kept in touch until 1982. They were true ambassadors, and both were from the suburb of Tel Aviv, Kiryat-Ono.

Fast forward to today. My husband and I have been making the trip to Sheba Medical Center 5-6 times a week for the past six weeks. Sheba sits adjacent to Kiryat-Ono. And, ironically, I’ve come full circle. From their letters, which I’ve kept tucked away and have been re-reading, Kiryat-Ono was a tiny little middle class village of single family homes and a few apartment buildings. About a twenty minute drive East of Tel Aviv, it was a sleepy little town.

Today, as part of the central coastal plain, where many many Anglos reside, it has become a sprawling upscale metropolitan area, a mix of secular and religious Jews. Anchored by Sheba to the South and the prestigious Bar Ilan University to the North, it is a rapidly-growing family community. High rise apartments are being built at a dizzying pace, and with that, malls, cultural centers, beautiful synagogues, and fantastic restaurants and gourmet foods stores. 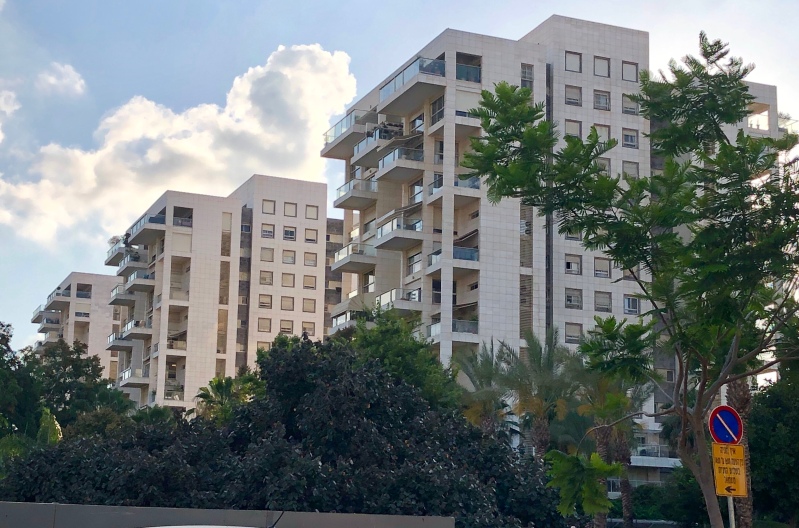 And right next door to this strip mall was the Center for Tsofim! As we were looking for a place to eat (KiSu Asian has become our new favorite place), the Scouts had just dismissed and were everywhere! Pre-teens through late high school. Their uniforms had changed only a little bit, and it brought back a flood of memories!!! And here I am! And here they were! I wish I’d kept in touch with my four friends over the years. I only hope they are happily married with families, health and success.

In the center of the city (no longer a quiet hamlet), you can still find the original single family homes and gorgeous tree-lined streets. Some of the older homes are being renovated; others torn down and replaced with bigger, modern villas. 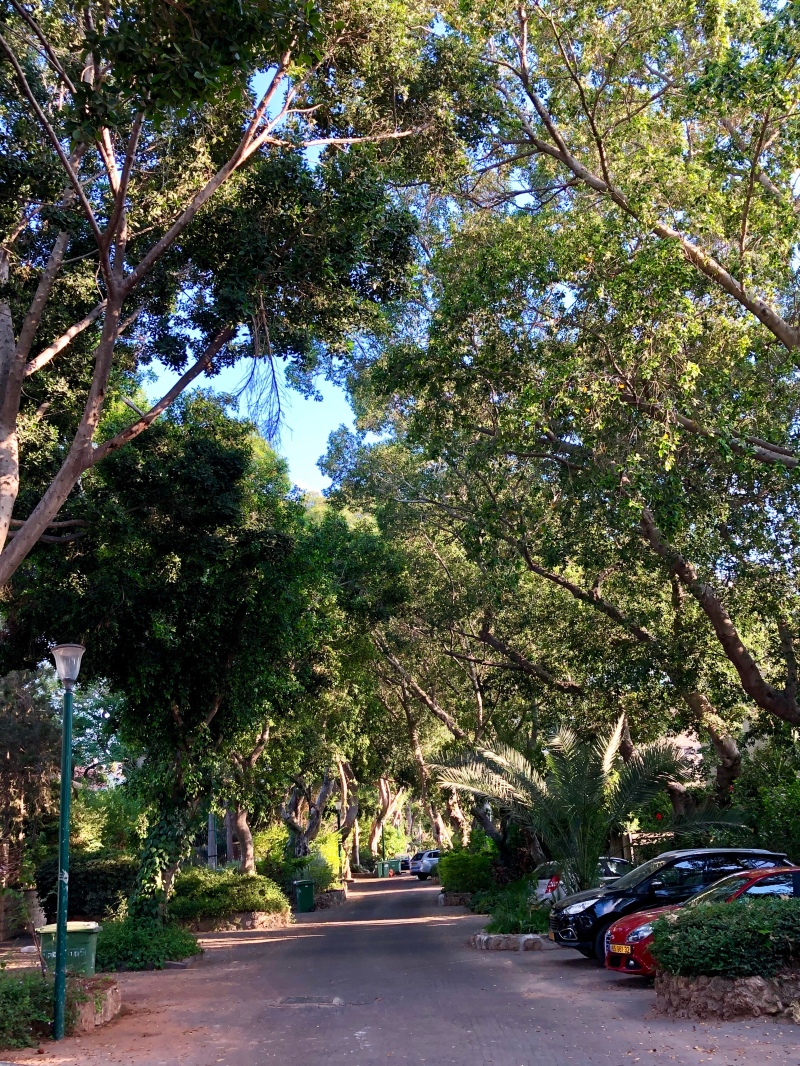 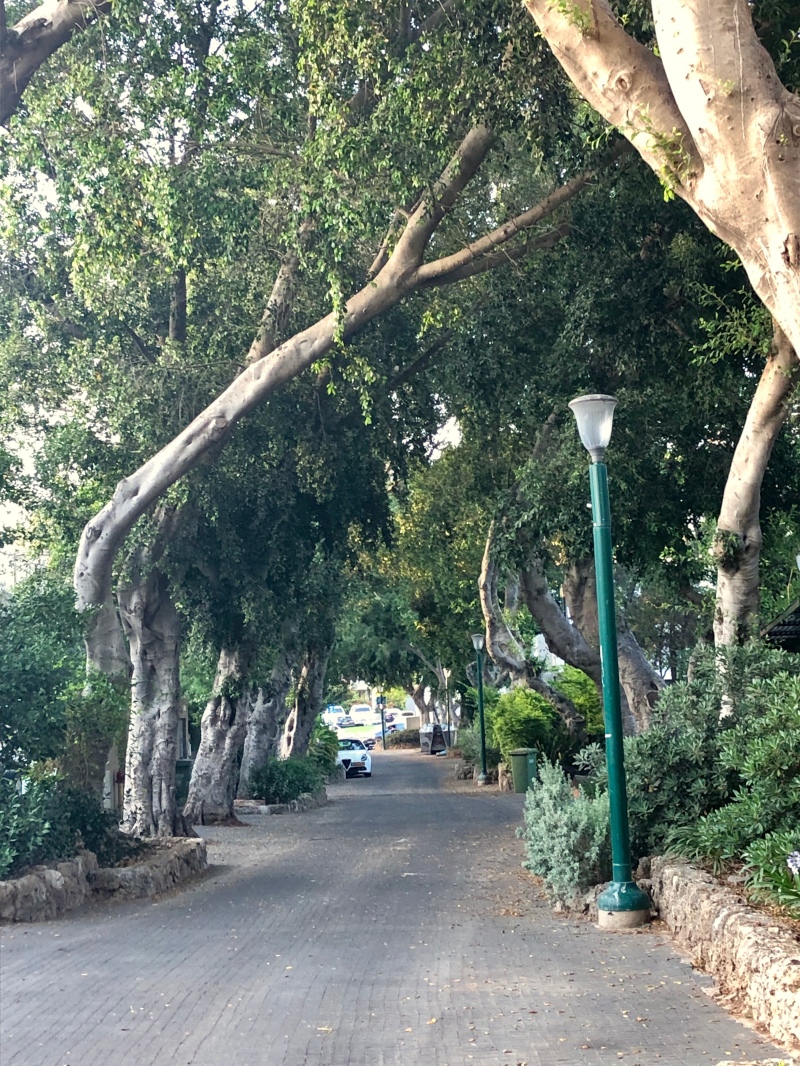 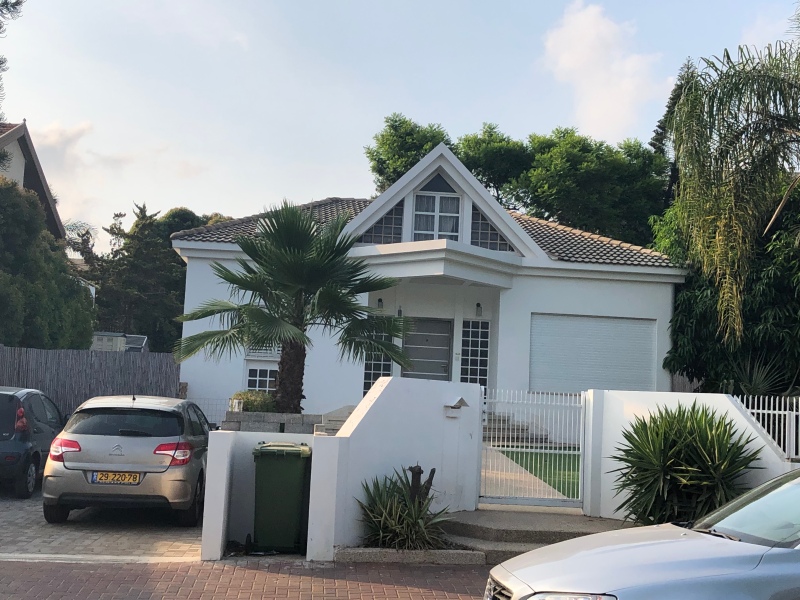 John and I have taken advantage of our time in “the Merkaz” (central Israel) to scout out other areas as well. There’s Petakh Tikvah and B’nei Barak, both growing exponentially from tiny villages in the 70’s to high rise metro areas today. And each city has its unique flavor. Whereas Kiryat-Ono is more like Southern California, B’nei Barak is home to a huge Orthodox Jewish Hassidic community. So much so, that the entrances to the city are closed to driving on Shabbat and holidays. And as the sign says in Hebrew, they mean business (or no business!) -don’t even think about driving there. It’s not going to happen!!!!

On to Holon, just Southeast of Tel Aviv, where we spent a pleasant afternoon. Holon was originally built by Polish Holocaust survivors as an industrial town shortly after World War ll. Known for its textile, metal, and appliance factories, this working class town was repeatedly attacked by surrounding Arab communities during the war of 1948. Today, the city has been transformed into another very upscale urban area with a population nearing 200,000. Besides Hebrew, languages spoken are English, French and Russian. 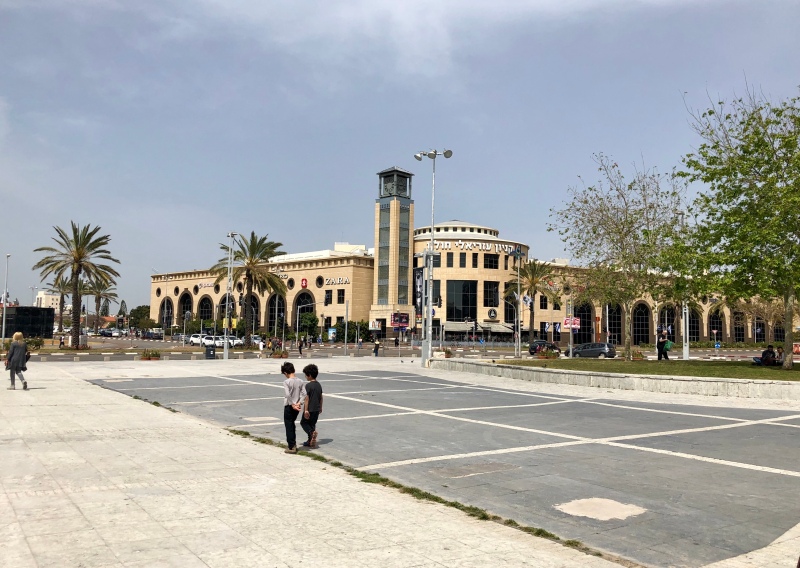 I had wanted to visit the Israeli Design Museum in Holon for years. Each month features an homage to innovation and design from eyeglasses to timepieces to vacuum cleaners. Its quite unique and interactive displays bring common objects to life. Our time there brought us the design of Dyson -as in household appliances. John, an industrial design engineer, was totally in his element. 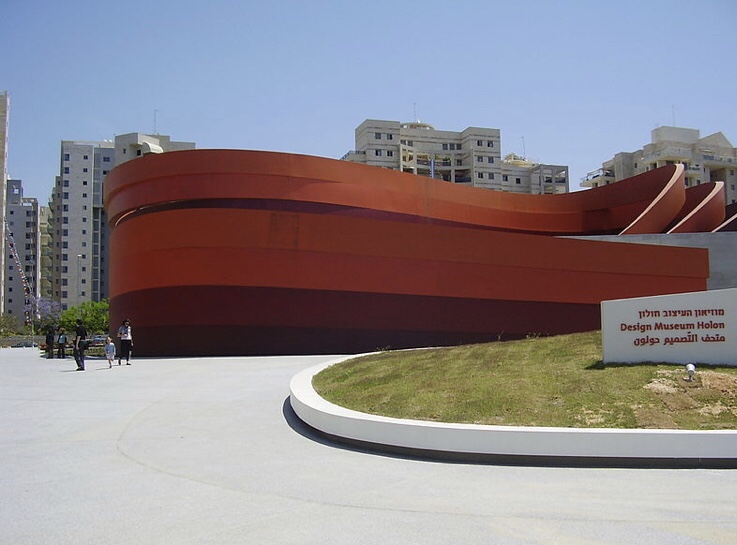 Holon also has a fabulous children’s museum and a comic and caricature museum (we didn’t have time for that one). It is home to the Olympic Israeli rhythmic gymnastics team (first place) and has a world-class music conservatory. Violinist Pinchas Zukerman holds master classes for the young students there each summer. There is also a huge children’s theater in Holon. And Holon Cinematique, Israel’s only digital and media arts festival is held annually. It’s definitely a happening place!

We did manage to stroll through Yanit Park, a man-made family water park. Really well laid out and even though it’s in the city, you feel like you are in a tropical paradise with fountains, 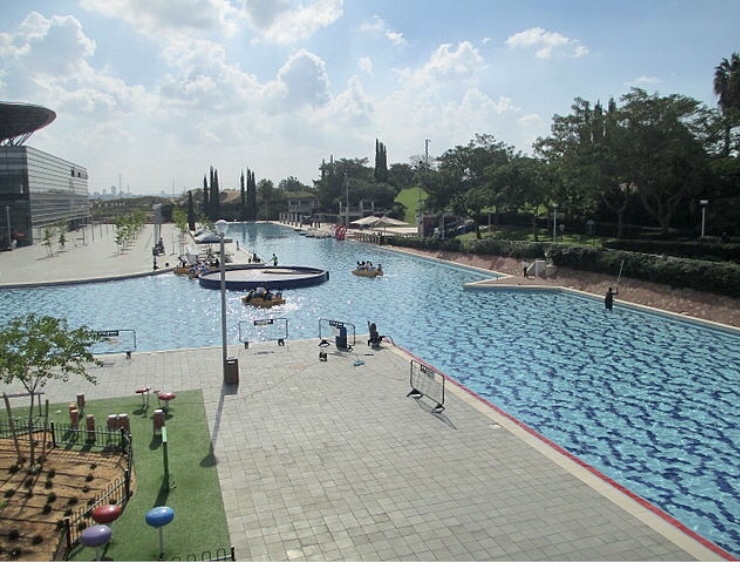 Still, in the midst of all the new, history is given it’s due. You can visit the old part of the city, now a living museum of historical pioneers’ homes and the monument/museum of Tel Harish where battles for Israel’s independence were fought.

This area is so different than where we live in the North. For a country the size of New Jersey, there’s a seemingly endless amount of variety and diversity! And there are so many more places for us to scout out!