Before the settling of the Land of Israel by the Jewish pioneers of the late 1800s-early 1900s, Israel was a vast, uninhabited wasteland of bare mountains and deserts. In 1866, the beloved American author, Mark Twain set out on a trip through Europe and the Holy Land, writing his memoirs of the journey in his famous book, The Innocents Abroad.

Twain was fed up with the primitiveness of the settlements and roads he encountered: “The further we went the hotter the sun got, and the more rocky and bare, repulsive and dreary the landscape became…There was hardly a tree or a shrub any where. Even the olive and the cactus, those fast friends of a worthless soil, had almost deserted the country”. The statement reflects his general attitude to the ancient land throughout his journey.

I come from a line of Tree People. Before Earth Day, before it was even popular, we planted trees and forests. My mother was sometimes known as ‘The Tree Lady.”  From the 1950s to the 1990s, she took on the job each month of calling up every member of the Jewish community in our small Southern US town. On behalf of the Jewish National Fund, she would read out the list of birthdays, anniversaries, new births, deaths, weddings and Bar and Bat Mitzvahs of our community for the month. These were all opportunities to make a small donation and have a tree planted in Israel in that person’s honor or memory. In turn, the recipient would get a lovely certificate of planting with the location of the tree. When I lived in California, I became The Tree Lady for my congregation. For years I did the same, inviting people to plant a tree each month. My sister in Raleigh is also a Tree Lady. And so it goes….

When I moved here, it was no surprise to see much of the country covered in forest – mostly various species of pine, but also deciduous oak and maple and elm and hickory and redbud in the North. It is gorgeous and life-giving. Almost every mountain has been planted, blanketing huge swaths in vibrant hues of green.

From the mirpesset, balcony of our house, we look over acres and acres of JNF planted trees. Favorite pastimes of Israelis are hiking, bicycling and picnicking in the forests. Through many donations, and much hard work, the Land has come alive again. We, too, go hiking and have picnics in these government protected areas. Many a last minute decision to pack up a backpack of food, grab the dog, and jump in the car to get out of the city has resulted in an idyllic adventure. Often we pass random people stopped by the side of the road and setting up folding chairs, tables, food – and hookah and coffee set-ups to have a little relaxation time. Jews, Arab Muslim and Christians, Druze – we’ve passed them all enjoying nature in the forest. The Israeli forests are open and available to all.

Very sadly, there are certain (not all, but enough) Arabs who call themselves the Palestinian Peoples who do not want to see the Jewish people in the Land of Israel. They try to thwart our being here any way possible – and one of the ways they terrorize the people is by setting fire to the forests. Each year, there are massive forest fires in this country set by these Palestinian arsonists (It’s a bit like being back in Southern California during brushfire season). 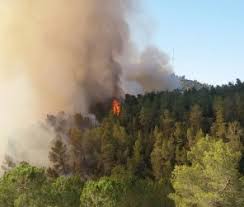 However, there are several things that are done here that are not done in the States. Namely, we have excellent forest control. If there are any dead or diseased trees, they are removed immediately to keep the forests healthy and to keep any blight form spreading. This is a necessary preventative measure. It is good stewardship of the Earth and its resources. Healthy forests free of dead and decaying matter are less likely to burn as quickly. Still, the damage is done each year by the arsonists.  When a forest burns, after they are put out, the land is immediately cleared and new trees are replanted. In abundance. (There is also video of Arabs pulling out the trees within a day or two of the Jews’ planting. This happens repeatedly.) But these modern day pioneers and nature lovers prevail, as they are constantly putting in new trees and forests across the entire land.

In the Galilee, we have acres upon acres of olive trees. Fruit orchards line the Hula Valley and Northern Golan. Palm Trees stand proudly in rows that go on for miles in the Jordan Valley and in the desert. Most of these groves and forests are still made possible by the donations to the Jewish National Fund. The Israelis in Judea and Samaria have turned the desert mountains green by bringing in irrigation and planting – trees, bushes, grasses, and crops.

Forest Ben Shemen, ‘a green lung in the center of Israell’

We love our land. We are proud of our country. As a whole, Israelis are very green, taking care of the Earth and encouraging her bounty. We know how important it is to get away from the hustle and bustle of city life and go Forest Bathing, a now-popular term that was coined here. There are usually (not this year due to COVID) myriad nature camps for kids during the summer months. After high-school, gap year programs include forestry service – before army service the kids spend the year clearing trails, setting up picnic areas, cleaning the parks, planting trees, and caring for green space.

Today, I invite YOU, dear Reader, to go to the JNF website, use.jnf.org

or at Treesfortheholyland.com because trees are a living memorial. Thank you! 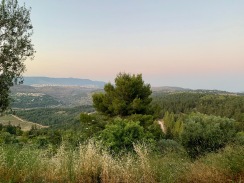 Driving home from a picnic in the Misgav Forest