A few minutes ago the two minute Memorial Day siren resounded throughout all of Israel. This year there were few cars pulling over to the sides of the roads and highways. Even fewer people on the streets or in shops standing at attention in silent, heartfelt prayer and remembrance of a loved one who was a victim of terror or who gave his or her life in defense of this country. We are still in lockdown, unable to go more than 100 meters outside our homes except to get food or medicine or to go to the clinic. Last night, the Yom haZikaron siren blared out, signaling the start of this twenty four hour period. As the national anthem, HaTikvah, The Hope, played from televisions and loud speakers, all of Israel stood on balconies of apartments and homes singing the words. We were separate yet unified.

Our collective mourning both diminishes and intensifies the pain we hold. The pain of our loss – the loss of another’s beloved as well as our own – is shared. We are all one united family. Israel is so small that most of us know someone killed by an act of baseless hatred or during a war. We share in each other’s grief, and knowing that, somehow diminishes the sharp heartstab. We are not in this alone. Yet to see such a vast sea of humanity beside me, the grief is intensified. So many who gave up their lives to defend the ideals of this country so that we could all live here together as free citizens, shapers of our own destiny.

Six years ago, we sat in the Los Angeles offices of the Jewish Agency for our first pre-Aliyah (immigration) interview. It was the day after Lone Soldier, Max Steinberg from the neighboring city of Tarzana, was killed in Gaza. We attended our Nefesh B’Nefesh-sponsored introduction to Aliyah evening with Max’s mother and sister. He had just left California to serve in the IDF. They went to the synagogue I had attended when I first moved to the Valley, and Max Steinberg was the same age as one of my daughters. We decided to make Aliyah in his honor, despite the fact a war was raging in the South. Every Memorial Day, I say a prayer for Max Steinberg (z”l) and his family.

This year, we decided to do something different, yet altogether meaningful. I went to the website Honorisraelsfallen.com to “adopt” a fallen soldier and his family. The minute I saw the photo of Ari Gavin, his big eyes and bright smile, I just knew he was the one I was to commemorate. Ari was born in 1972 to parents who had just emigrated from the United States. He was a humble genius, athletic, outgoing, deeply spiritual and concerned for his fellow man. Ari served in the IDF in the elite Paratroopers brigade. Immediately after service, he married Zehavit, his high school sweetheart. They served in the foreign relations division in both Latvia and Italy, where their first child was born. Upon returning home to Israel, Ari enrolled in Haifa University to study (and then teach classes in) Computer Science and Advanced Mathematics – while simultaneously working as a security guard for the Ministry of Defense at night to support his growing family. By the time Ari graduated (with highest honors), he was the father of three small children. Ari Gavin was a born leader, generous to a fault – one time he gave away half his paycheck to a man he saw scrounging for food in a trash can – devoted husband and father. While on reserve duty in the Golan Heights, he was killed on May 20, 2003. 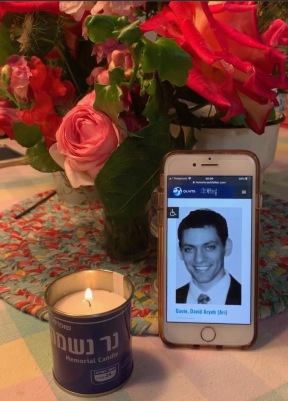 We will continue to remember his service by doing mitzvot, acts of charity and kindness, and prayers in his memory. I am trying to contact his family as well –

Also this past week, I felt the loss of a very good friend of mine. Noga was a beautiful Israeli/American woman. Born in Israel, she moved to California with her family when she was in middle-school, returning to her homeland for army service (voluntarily as a Lone Soldier). She returned to California – her dad was a university professor – and married an Israeli guy she happened to meet at Stanford. They decided to return to Israel to raise their son, and I met Noga when I first moved here. She overheard John and me speaking English in a cafe. At once, we began talking about California life, Aliyah, and family and we became fast friends. Two years later, we found out Noga was diagnosed with metastatic breast cancer. Together we celebrated life, discussed deeply spiritual things, relished her young son’s innate ability to create amazing works of art, and believed for G-d’s healing power against all natural hope. Last year as John began his chemo, we went to her bedside at the Italian Hospital in Haifa to say our goodbyes. We laughed a lot. We cried some. We prayed.

A whole year passed and Noga bravely clung to life as she entered into bio-immunotherapy clinical trials to treat this type of cancer. Both John and I tried to see Noga whenever we could. We were supposed to visit her at her parents’ apartment (they had returned to live in Israel years ago) when the COVID-19 pandemic hit and Israel entered into quarantine. Her mom, Aliza called us last week. Noga had passed away, and the funeral was held privately. Only her immediate family present. The seven day mourning period, shiva, would be observed without guests, without the prayer-support of ten men from the community, without anyone. We are bereaved – I am beside myself, yet life goes on. 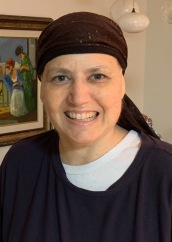 Tonight, the national period of mourning will end and we will enter into Israeli Independence Day. In a matter of minutes we are to go from saddness to joy. Usually there are fireworks and live concerts in every city. Tonight all will be on live-feed social media. The air force flyovers are still expected to take place tomorrow, so we will watch from the rooftop. Picnics at the beach and in the parks will be substituted by individual cook-outs on our balconies and patios. We look forward to the summer when we can have barbecues with friends and to next year when we can celebrate Yom HaAtzmaut in Jerusalem feeding Lone Soldiers and enjoying the festivities there. We live – hopeful – in anticipation of better, peaceful days ahead. 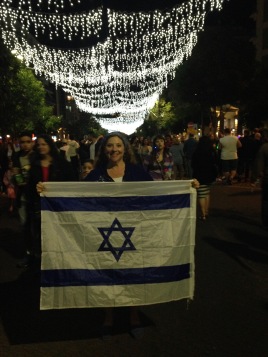