Adventures in the Desert 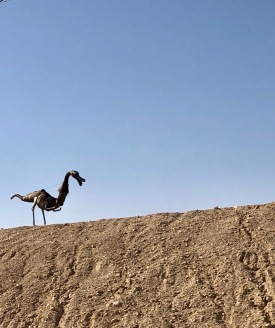 A few weeks ago I mentioned to a friend that I had always wanted to see (but never had) the film, Lawrence of Arabia starring Peter O’Toole and Omar Sharif. Obviously, things in the universe aligned, and I jumped at the opportunity to accompany friends on a spectacular field trip. 36 hours in the Negev Desert and the Arava region of southern Israel, which included a one-time screening of the movie about 20 miles from where it was filmed in Wadi Rum, Jordan.

The verdant fields of central Israel soon gave way to blowing sands, Bedouin villages, and the desert. Now I could experience, at least for a little while, the footsteps of the Patriarchs. In front of me was the eastern Negev: the Arava. To the North, the Dead Sea Valley. To the extreme south, the Red Sea. This region is part of the Syrian-African Rift, stretching from Turkey to Africa about 3000 miles. The Trans-Jordan cliffs to the East (Biblical Edom) and the mountains of the Negev that run parallel to the West make up the 110 mile Arava Valley floor. The sandy expense of the Negev makes up more than half of Israel’s land mass. It was the land of Abraham, Isaac and Jacob. Of Moses. And later in history, under the British Mandate of Palestine, the land of T.E. Lawrence. 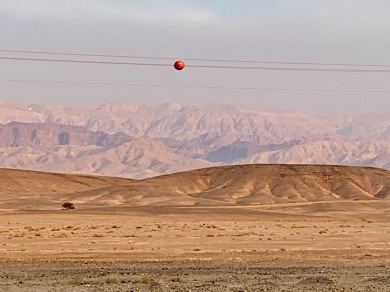 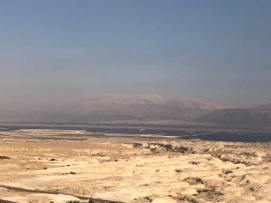 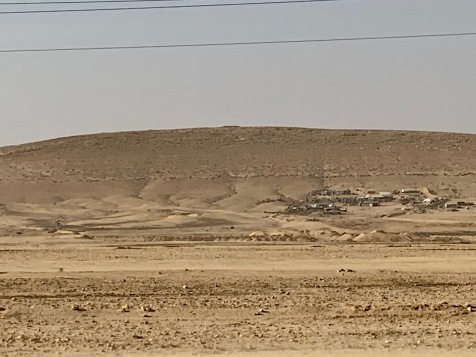 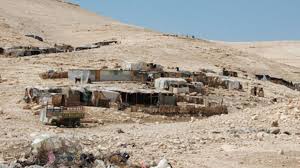 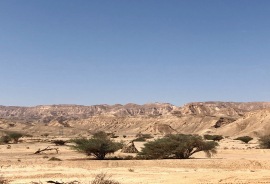 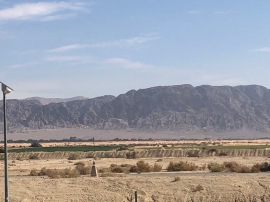 Except for stopping the car every 15 minutes to get out and take pictures, I made record time to the kibbutz where we would drop off our things before heading to the Arava International Film Festival in the new little village of Zukim (Tsookim/Zuqim/Tzukim). Tzukim in Hebrew, means cliffs. This community, first established by a group of Israelis and Anglos from the Southwestern United States in 2003, reminds me of communities one would find in Arizona and New Mexico. From the landscape to the architecture, it all seems strangely familiar. This little yishuv has big plans to double its size of 300 residents within the next ten years. Its main economy comes from travel tourism. Many of the homes have adjoining tsimmerim or guest lodges offering magnificent views and spa services as well as a small selection of gourmet (chef) restaurants. A community and sport center is currently under construction. Large buildable lots for sale offer expansive views of the red rocks and sandstone cliffs of the Negev. And what a magnificent view!!! There is also a funky desert artist colony there featuring sculpture, pottery, weaving and paintings. 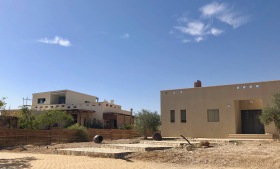 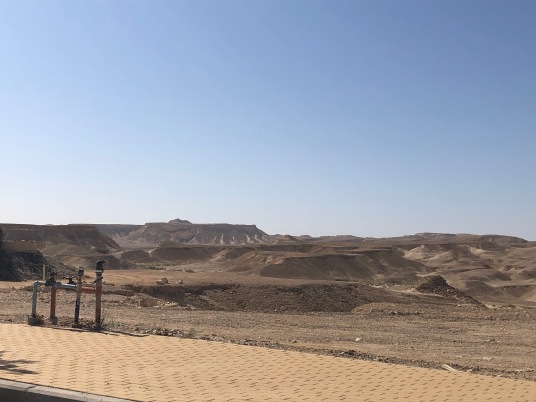 For the past eight years, Zukim has hosted the Arava International Film Festival each November. Featuring the top tier of global cinema, the movies include old classics, international award winners, animation, shorts, documentaries, and films for children and adolescents. This film festival is garnering worldwide critical acclaim. The specially constructed “theater” is situated outdoors between the desert bluffs, yet consideration has been made for maximum comfort. Moviegoers recline on super-comfortable pillows lining the stands and are provided with individual luxurious fleece blankets for snuggling under during the chilly desert evenings. Pop-up restaurants line the path to the entrance, featuring fast food, gourmet, vegan, and Kosher options. Dine in a desert tent or take the food with you into the stands. 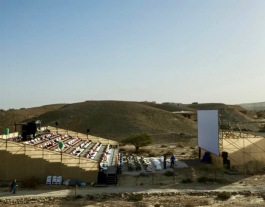 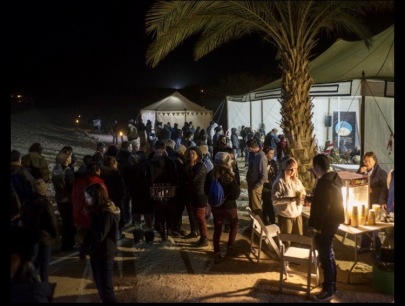 The filmmakers (or in our case, the immediate family members) are invited to share their experiences in the making of the movie featured that evening. What a treat! Both David Lean’s and Sam Spiegel’s families were there to speak on their travels in Jordan, Morocco and Egypt to film Lawrence of Arabia. Sam Spiegel was an ardent Zionist. Who knew?  As Jordan’s Hashemite Tribe controls the Temple Mount in the Old City of Jerusalem, and they were so pleased with the movie, Spiegel was the only Jew to be allowed to pray at the Western Wall between 1948-1967. For us, the once-in-a lifetime opportunity to watch this masterpiece under the stars near its actual location was, as Sam Spiegel, Jr. said, “almost as good as watching Star Wars from outer space.” 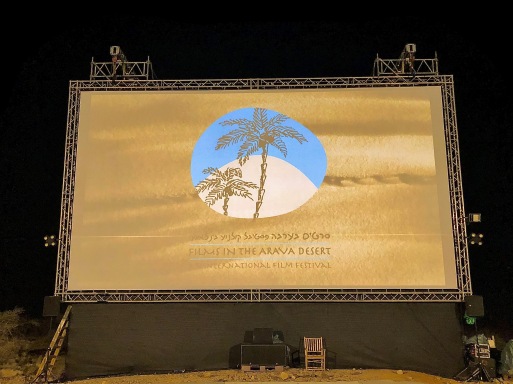 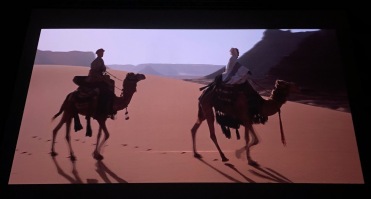 The following morning. we woke up early to explore Kibbutz Lotan, where we spent the night. It is located about twenty minutes north of the city of Eilat on the Red Sea. Founded in 1983 by the Reform Judaism Movement, Kibbutz Lotan is “a place where spirit and earth meet.”

The community thrives on eco-tourism and its date farm. At one end is the kibbutz housing for the residents and the guesthouses for visitors. Each structure is made from straw and desert earth and is powered by solar and wind energy. As with all kibbutzim, there is a central dining hall, a kindergarten, and an elementary school as well as a library, synagogue and community center. A swimming pool and tea house/cafe are available for kibbutzniks and visitors. Bicycles, the preferred method of transportation on the kibbutz, are also available for the guests. Birdwatching and frisbee golf are favorite pass-times for both residents and visitors to Lotan. Eco-tours are given daily. 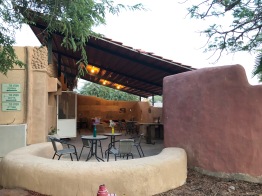 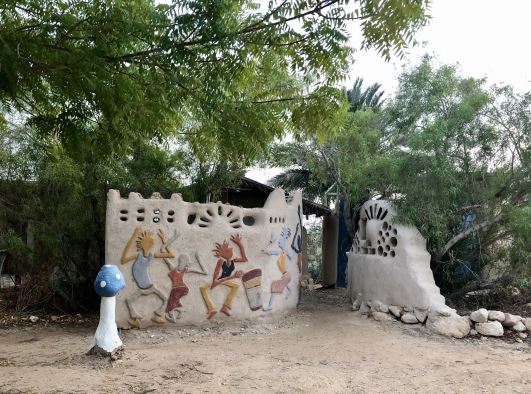 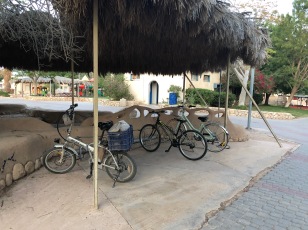 Of special interest is the Center for Creative Ecology, a sustainable community consisting of a dozen cottages where participants live, farm, and cook their meals. Recycled vegetable oil is used for fueling many of the kitchen appliances. Everything is recycled and composted for use in the desert vegetable garden and fruit tree orchard. Except for potable drinking water, all of the water used for irrigation, cleaning, laundry is recycled gray water or desalinated water from the Mediterranean. Vegetarian  cooking classes are offered where participants can bake breads and pizzas in the hand-crafted clay ovens. 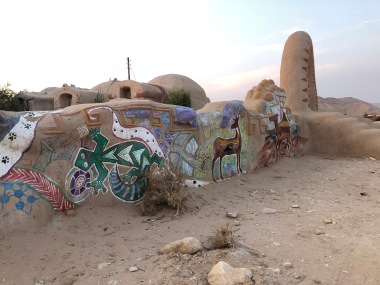 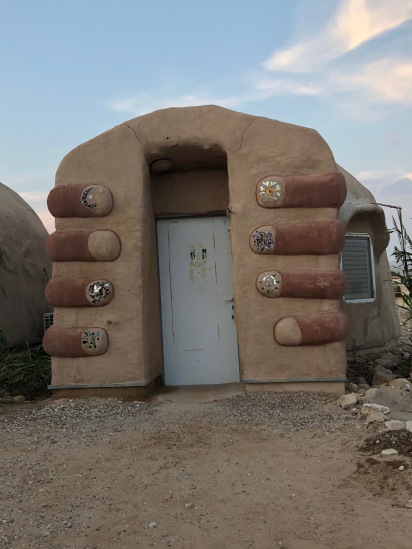 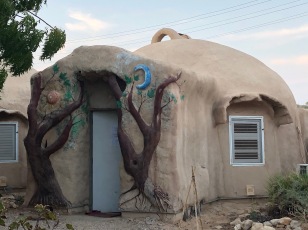 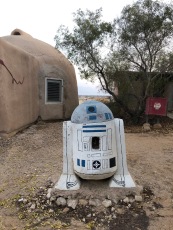 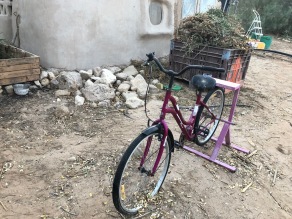 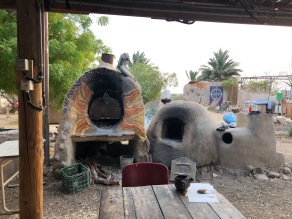 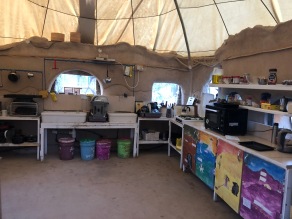 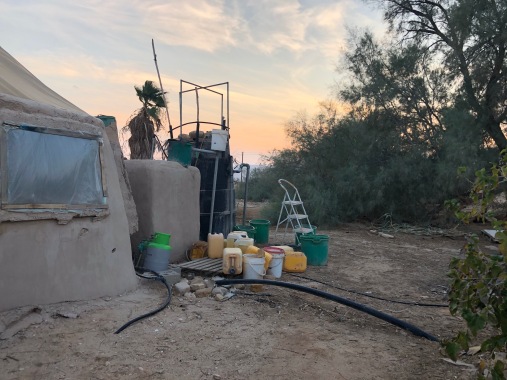 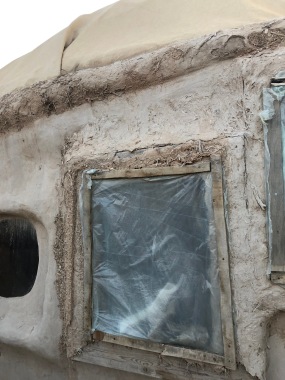 Before our return trip to the North, a visit to Kibbutz Yotvata, the oldest kibbutz in the Arava, was in order. The Yotvata Dairy is famous throughout Israel for sakit shoko (sa-keet’ show-koh), chocolate milk that comes in a hand-held plastic sac. Every kid here loves it! Tear off a corner of the bag with your teeth and enjoy sucking out the velvety, rich chocolate milk inside. It’s an Israeli institution. And at the tour, you get to taste that shoko. In my opinion, Yotvata is some of the best milk in the country. And their homemade ice cream (glee-dah’ which is only available at the Yotvata Factory store) is the best in all the land! Even though they live in the desert, Yotvata cows are happy cows and their milk is a testament to that fact. 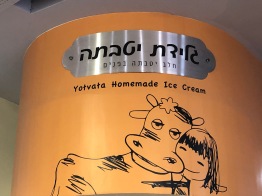 It’s amazing to see how these adventurous, hard-working Israelis are cultivating the barren desert. David Ben Gurion, Israel’s first prime minister, had a dream of making the desert bloom. A blooming it is. All along Highway 90 are date farms, pomegranate orchards, and rows and rows of covered agricultural tents. Using desalinated water, recycled water, and water from the Red Sea, there are tropical fish farms – yes!!! You read that correctly! We found Nemo in the desert! And herb farms – we found fresh Basil in the desert! And tropical flower farms! You can even visit the most eccentric place called Crocoloco, a crocodile farm in the desert. It is definitely a land of ingenuity!!! G-d promised He would make the desert bloom again – 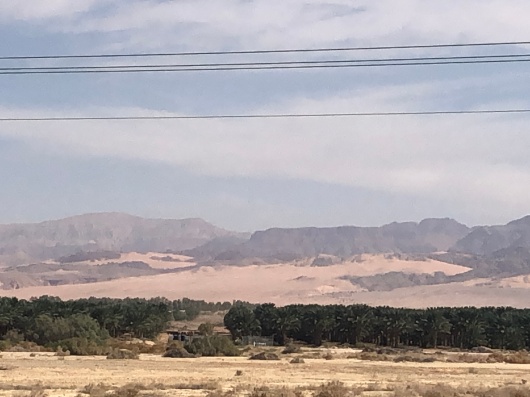 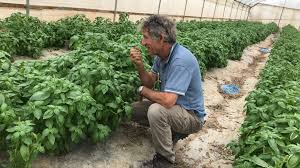 Israel is a land of history, archaeology, culture, and breathtaking beauty. For a country smaller than the state of New Jersey, it never ceases to amaze me! It takes a certain kind of person to settle in the desert – and the people we met were part visionary, part stout-hearted – quirky and eclectic people. People devoted to a dream. Fiercely independent, a bit alternative, totally Israeli. I leave you with a bit of that quirkiness found in the most extreme regions…. 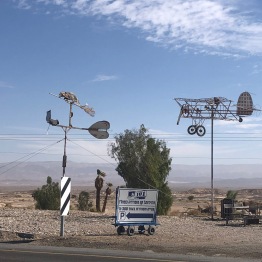 One thought on “Adventures in the Desert”