Several weeks ago, John and I ventured to Bet She’an just south of Mt. Tabor in the Jezreel Valley in the northeastern part of Israel near Jordan. It is one of the most fascinating of the ancient cities, extending over 400 acres. First settled by the Egyptians in the pre-Canaanite Period, later it became a Philistine stronghold. Located directly under Mt. Gilboa, the Philistines displayed the bodies of King Saul and his sons here on the city walls after the great Biblical battle.  The city was later captured by King David and became the administrative center for the area under the reign of King Solomon. By 732 B.C.E., it was destroyed by the Assyrians, eventually to be re-settled by the Greeks who founded the city, Nysa-Scythopolis, on the site. Afterwards, it fell to the Jewish Hashmonean Dynasty (think Macabees) and became a largely Jewish town. In 63 B.C.E. the Romans conquered the area, and as one of the ten cities of the Decapolis, became the most important city in northern Israel. There was a major building period with additions of theaters, temples, bathhouses and grand public buildings and marketplaces. At this point, Scythopolis was inhabited by Romans, Jews, Samaritans, and pagans. During the Byzantine period, the city became Christian, and monasteries and churches were built over the temples and Roman religious sites. The area underwent a steady decline during various Arabic conquests, with many of the structures paved over and new homes and shops  built directly over the Roman structures. There was a terrible and devastating earthquake in 749 A.D., destroying the city. In the centuries that would follow, it would become a small Crusader outpost with fortress, and eventually a tiny Ottoman town. Since the establishment of the State of Israel, Bet She’an has been excavated (most of it since the mid 1980’s) and is now a phenomenal World Heritage Site.

Individual shops formed the agoura with housing behind

Many of the floor mosaics here are wonderfully preserved. It never ceases to amaze me that people are actually allowed to walk on them!!! Some of these floor mosaics were so beautiful, but covered up with newer tiles and marble slabs by successive inhabitants. I can’t even imagine who would want to do such a thing, but we joked about how “Mrs. Ahkmed just didn’t like the fancy Greek and Roman tiles, thus asking Mr. Akmed to replace it with something more simple.” And I loved how the archaeological strata was so well-excavated that I was able to see how one city was actually rebuilt atop the previous civilization using torn-down columns and existing remnants of the former structures to shore up the next building project.

Most impressive was the huge and magnificent ancient amphitheater. Originally built by the Romans during the 1st century A.D., it held up to 7000 people. It was later used by the Byzantines, then fell into disrepair, but during summer nights today, it is the place to be for laser light shows, plays, and operas. What remains today is only the first full level and part of the second row of seats built with limestone block and placed atop the carved rocky mountain slope. Behind the stage, you can see a row of granite and marble columns. A canvas was hung over the stage in ancient times to provide shade for the performers. And a large back facade used to stand where now is just open air. Only a bit to the right side of this structure remains, giving you the idea of the grandeur of the place. 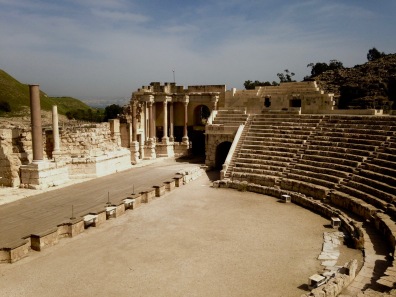 There were two huge bathhouses built in Scythopolis by the Romans, one more impressive than the other. There were sex-segregated areas, but basically one entered through colonnaded porticoes and gardens. First, you went into the apodyterium,  changing room, where you would leave your toga and get a sheet or towel, much like a locker room in today’s spa or gym. The women’s quarter held small private gardens with fountains and shallow pools to wash the feet. The men would be able to do weightlifting or Greco-Roman wrestling in their larger area. After this, pure olive oil would be rubbed into the skin by a spa attendant wearing a belt/chatelaine with oil bottles and utensils hanging from it. The strigil, a blunt metal scraper would be used to scrape all the dirt, oil and dead skin from the body. There was no soap ‘back in the day.’ Then it was time for the calderium,  or hot room. Behind these huge rooms, a fire was kept going continually to heat up the water flowing from the mountain springs. Under the marble flooring, round, squat hypocausts, filled with hot water kept the floor hot all year long. Vents in the terra cotta tiled walls provided the steam for the ancient sauna rooms.  After sweating it out, a person would go into the tepidarium, room- temperature indoor pool, or frigidarium, to plunge into the cold pool filled with fresh mountain water. Of course, massages for the men, and grooming and beauty treatments for both sexes were provided in the adjoining salons. Concerned with the development of the whole person, scholarly lectures, political debates, and symposia would also be provided in the forum. (O.K. So, I’m a homeschool Geek mom who loved studying the ancients!!! If only my kids were here with us so they could actually be able to see what we studied so intensely!!)

The city is quite  large, but easily walkable in a day. We purposely went early spring, because summers in Bet She’an are incredibly hot and humid. Coming from Southern California, we are all too familiar with the threat of earthquakes, but to be able to see the damage to this once-beautiful city is a real eye-opener. At the northern end of the city, the archaeologists purposely left the toppled columns as they were found. Today, they lay strewn in the street, frozen in time, a portent of the power of nature. Blocks forming parts of the street are pushed up, and rifts can be seen along the smaller fault lines. It’s quite alarming.

Toppled columns from the earthquake of 749

Cribbage anyone? Divits in the sidewalk where the game was played in times past.

Within a few miles (km) of Bet She’an are the warm water springs of Park HaMayaanot and Gan haShlosha. As we have in the past, we took our swimsuits to soak our tired muscles in the pools. After a long day with much walking, it was desperately needed. The small fish in the springs nipped at my legs and feet, but I could just imagine the Romans relaxing in their bathhouses or David and Jonathan coming here to cool off in the hot summer. The many pools in the area form a shaded oasis that is great for picnicking as well. Just another reason to love this wonderful land!! 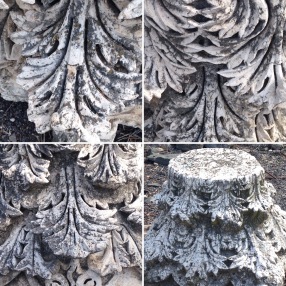