It’s been a month and a half of celebrations and revelry here in Israel. We’ve had such fun. First, there was the week of Passover, with the big seder meal recounting the exodus of the Children of Israel from Egypt to freedom in the Promised Land. We reenact the story with symbolic foods, songs, families celebrating together, and the retelling of the whole Passover experience. There is no school during the week, and many government offices are closed for national celebrations. There are food, music, and cultural festivals throughout the land. Museums are free to the public. Many people (including our family) have fun hiking and touring the country. We had a blast with our daughter, Elizabeth, kayaking down the Jordan River (jam-packed with families, but fun nevertheless).

The day after Passover, Israeli flags start going up all over the country. I’veneer seen such national pride. On all freeways, bridges, city streets the flag is hung. Everyone hangs flags and banners from their homes and apartments. You see the Star of David on cars, candy bar wrappers served with your coffee, billboards, and buildings lit up in blue and white. It must mean Independence Day. But before that happens we remember those who suffered and died during Holocaust Remembrance Day, and our fallen military heroes on Remembrance Day. Somber and sweet mixed together. It makes for quite an emotional month. Towards the end of the celebrations, we have the holiday of Lag B’Omer (for a complete explanation see my May 15, 2015 post as well as April/May, 2015 for festival significance). It celebrates the Divine Light in the world, the contributions of Rabbi Akiva of the 1st century, and enlightenment through Scripture. It is a night of fire and fun.

This year I had the opportunity to interview lots of kids as they collected wood for their huge bonfires. Right after Passover, kids of all ages start scouring the neighborhood for wood. Shopping carts full of wood. By early afternoon, the kids start scouting out the choicest places to build their fires. Brush is cleared and stones are put in circles. Lawn chairs come out, and one person is selected to guard that spot. The others drag the wood planks and palettes. One pile for later use, one pile for the fire circle. Some school classes hold their fires as a group near their school grounds. Some synagogues hold their own, and other families with younger children get together and build neighborhood bonfires. The teenagers use this night as almost a rite of passage. This is one time when they can stay up all night and be with their buddies. They bring their music – guitars and hand drums – or portable sound systems. It’s a night of singing and dancing.

And of course – there’s the food. Nope, no scores here. People wrap potatoes and veggies in foil and throw them on the fire. Some people roast hot dogs and shishlik on skewers(chicken marinated in fruit juice and Yemenite spices, or spiced ground beef logs). Here’s a great and simple recipe one of the kids shared with me that evening. Great for camping trips and oh-so-delicious!!!

Take a huge, raw potato and cut off the top about 1/4 of the way. Set top aside. Scoop out a healthy portion of the inside to form a cup big enough to crack an egg into. Generously salt, pepper, and smiley paprika the inside of the potato. Crack an egg into it. Replace the top, securing firmly in place with toothpicks. Olive oil the outside, and sprinkle with salt. Wrap really well with foil. Place at edge of fire/on embers for about 20-30 minutes. remove, let cool, unwrap and enjoy!!!  Scroll on picture for description-

Starting the fire pit in an empty field

Whole families gathered in the lot adjacent to our neighborhood.

It was a good thing the alert went out the day before to make sure all laundry was taken in and all windows were closed tight. The smell of campfire pervaded the air for a couple days afterwards.

Last week we celebrated Yom Yerushalayim: Jerusalem Day, commemorating the 49th year of the liberation of the city. The Old City – the Holy City – had been under occupation by Romans, Arabs, Crusaders, and Arabs again since the year 70. For the most part Jewish people were not allowed to enter the holy sites. We sang about it, prayed that we would never forget Jerusalem (Psalms), and dreamed that one day we would be able to go back to the walls of the Temple to pray again. When Israel was declared a nation in 1948, Jerusalem remained a divided city. The Eastern half was completely blockaded from the Western, Jewish half. the Holy City was controlled by Jordan, and we looked upon its golden walls with longing. Then, in June of 1967, all the Arab countries that surround Israel were amassing for imminent attack on all sides. For a great read (so exciting I couldn’t put it down), I highly recommend Stephen Pressfield’s The Lion’s Gate. In the first hours, with many recorded miracles, the small Israeli Air Force obliterated the entire Egyptian Air Force all the way down to Cairo. They had nothing but reconfigured older planes from France and the US. The Israeli ground troops also fought along Jordan and the Golan Heights bordering Syria. That was also miraculous and successful. The greatest achievement was the liberation of Jerusalem. I will not spoil the whole story here, as it is quite dramatic, and also miraculous, but for the first time in millennia, the Jewish people reached the Kotel, the Western Wall of where the Temple once stood – amid shofar blowing, tears of joy, song and dance. The entire war was over in just six days!!!! Ever since, Jerusalem has remained a city open to all faiths. The Christians are in charge of all their holy sites. Pilgrims can come to worship there freely. The Muslims still control the Al Aqsa site, and the Jewish quarter is accessible for those who want to worship on the grounds of their ancestors.

Saturday evening Rabbi Gil Nativ spoke to a packed house at Kehillat haKerem Synagogue. He was part of one of the battalions liberating the Holy City of Jerusalem. And he is now one of my heroes!!! I was on the edge of my seat as he recounted his story of the hours leading up to the hilltop siege. It was his responsibility to carry the heavy ammo boxes for his platoon. Rabbi Gil showed us amazing pictures from his experience. My favorites were the soldier sleeping on the bed of an abandoned home in the Old City to get a couple hours sleep – while the snipers were still firing! I love the picture of the group taken just after the Temple Mount was liberated. The area where the Western Wall Plaza now stands was piled high with refuse. But it was a joyous occasion to pray there despite all the repair work that needed to be done. And most definitely a high point in Rabbi’s life knowing that he was part of the making of history!

So now, it’s Shavuot, 50days after Passover. Because we celebrate the giving of the Law to Moses by G-d on Mt Sinai – and the Bible itself compares the Torah to milk and honey, it is customary to eat dairy products on that day. It is also a tradition to stay up all night studying and discussing Scripture. So I’m giving you my latest Shavuot dairy recipes. I’ve tried to use not only dairy products and honey, but to incorporate several of the other of the seven native species to Israel as well.

I chose to make these because the rolled crepes represent the Torah scrolls. Also it’s a traditional Ashkenazi comfort food which I grew up eating for light summer suppers.

Beat the eggs well until lemony yellow. Then slowly add in salt and flour, mixing well.Slowly pour the water in stirring the mixture continually. Put plastic wrap over the bowl and refrigerate at least 2 hours.

To make the filling blend the cheeses, vanilla, cream of wheat, egg yolks and honey. Mix well. You can add grated orange or lemon rind (1 tsp) if you’d like…

Heat a 7 inch (18cm) frying pan and grease lightly. When the pan is hot, add 2 Tbsp batter, to coat the surface. Cook on one side only over a medium heat until the top dries out and small bubbles form. Flip the crepe out onto a piece of waxed paper. Continue with the rest of the batter alternating wax paper and crepes. Reserve some for topping, if wanted.     When the blintzes are all cooked, fill each one with about a Tbsp of the cheese filling, spreading in a line right up the middle. Top with cherry vanilla conserves (about 1/2 Tbsp) in a line. Fold over the top and bottom and then roll the filled blintz like you would a burrito or jelly roll. 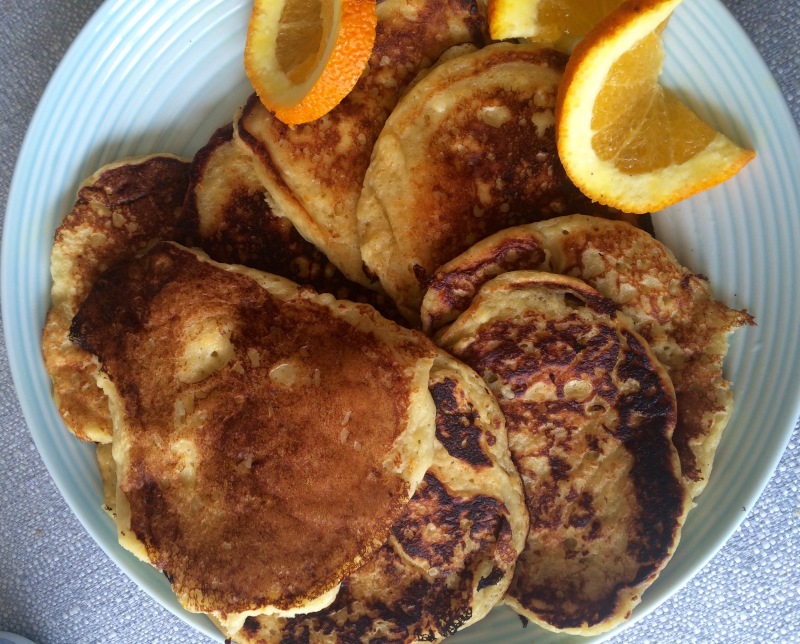 Mix the cheese, eggs and honey together in a medium bowl. Add the lemon zest and juice. Mix well. Stir in the flour until just moistened. Heat the oil in a large frying pan (nonstick). plop a small circle of batter for each pancake into the pan. Cook until browned and bubbles form, but do not burn. Flip and cook until golden brown and spatula lifts the pancake easily. Continue with remaining batter. Serve hot with orange slices and maple syrup.

What’s better than staying up all night than grilled cheese sandwiches?? Yum!!! Try these different combos:

That’s enough to party on!  And top it all off with a large slice of CHEESECAKE!!!

One thought on “Spring Holidays (Recipes!!!!)”