Part of yesterday was spent among friends, mostly Americans,  reminiscing and discussing Memorial Day and Fourth of July, the American Independence Day – and their equivalent Israeli counterparts. People my age remember past Memorial Day observances in America: parades of veterans in their hometowns, and the fact that all stores were closed on that day. Many people visited cemeteries to honor the fallen veterans. July Fourth seemed all about patriotism. Once again, everything was closed and we went to the local parades in the morning. Some of our friends remembered baseball games they would attend as a family, or local community sports activities. Some went to concerts of patriotic music in the parks. As a kid, my family always went to the neighborhood pool for games and fun. And of course, the entire towns of our childhood were adorned in red, white and blue: buntings, ribbons, swags. Everyone hung out the American flag, and everyone waved smaller, personal flags. All of us remembered speeches – and at some point during the day, the Declaration of Independence was read aloud, the Star Spangled Banner was sung along with other American classic songs of country.

Somewhere along the way, I think – and I am including myself first and foremost – the adults of my generation dropped the ball in teaching our children the history and importance of these holidays. In the years just prior to emigrating to Israel, it seemed that there was less and less true patriotism and more commercialism. And our children were none the wiser. For us, Memorial Day was just an extra holiday or day off. It was a day where we could catch up, shop for all those Memorial Day special buys, or go to the beach and have a barbecue. I never truly passed on to my children the necessity of setting aside a specific time to honor the great sacrifices made over 240 years to establish and protect our own beloved United States, and eventually to defend the freedoms of others in different parts of the world. We, along with our American friends present had ever taken our children to a military cemetery to lay a wreath or remember those who had valiantly given their lives for our Republic. During Memorial Day in the States, we never discussed the heroic efforts of family members in past wars. For us, it was more a day of celebration and shopping than of somberness. And today the newer generation of Americans seems to have lost their sense of who they are and what made us so exceptional.

A couple of my American friends who are now Israeli citizens (as well as online posts I had seen) decried the fact that the Israeli Memorial Day is the Day before Independence Day. That one has to transition from somber to joyous at the batting of an eye. It’s really difficult. Now I understand why it is this way….

Each Israeli holiday starts at sunset. The evening of our Memorial Day found us doing last-minute shopping. In the afternoon, all the stores were closing early – and would remain that way through Saturday night/Sunday. Nothing – and I mean nothing – would be open. People were going to their homes and neighborhoods for the beginning of a very solemn occasion. At exactly 8 pm, the national sirens started blaring for one minute to signal the day of remembrance. Memorial candles were lit in each home in honor of those who gave their lives in acts of heroism – service to their country – and acts of terrorism. Everyone knows someone personally, our family included. Max Steinberg of Los Angeles, lone soldier, who was killed during Operation Protective Edge (2015); Alon Bacall of Karmi’el who was randomly mowed down with his friends while at a cafe the morning of this past New Year’s Day by a terrorist’s machine gun killing spree. The television stations all broadcast the same program: the Memorial Ceremonies at the Western Wall and on Mt. Herzl, the equivalent of Arlington National Cemetery. The prime minister, present, Knesset members are there, as well as top leaders of the IDF, clergy, and the families of the fallen. Afterwards, and throughout the day, the stations highlight the stories of the fallen and interviews of family members. Also, during the day, all radio stations power the music down a few notches. Instead of the upbeat pop tunes, songs of prayer and loss, folk songs from the establishment of the state and other historical songs are heard. It’s reflective and quiet and sometimes, wistful.

We decided to be “on the highway” for the next siren. I wanted John and Max to experience this firsthand. At exactly 11am, everything stops for two whole, seemingly endless minutes. People stop their cars on the side of the road when the sirens begin to sound. Everyone gets out of their car; people come out of their shops. Children stop playing. The radio stops broadcasting. For two minutes the world is silent except for the wail of the horn. Silent in remembering. Silent with heads bowed. Tears run down cheeks of even the most hardened. Shoulders are rounded. A time to mourn… then after the two minute blast, everything resumes as usual. People get back in their cars and drive away. Shopkeepers continue to sell their produce right where they left of. Children get back on their bicycles or continue kicking their soccer balls. I have never experienced anything like it anywhere else. We in America could learn a lot from this. There are no speeches calling for revenge or unfairness. Just collective reflection and mourning – and appreciation for the hard-won land.

Here, it is customary for people to make visits to the local cemetery. I decided this would be a great opportunity to start afresh, so John, Max and I went to the cemetery. I can’t even begin to tell you how heart-wrenching it is to see whole groups of young soldiers mourning the loss of a fallen comrade. Older men in uniform who come to remember a battalion friend who gave his life. Parents and children of all ages placing candles, rocks, flowers on their loved-one’s tomb. We payed our respects at the grave of our neighbor, Ze’ev. He was not killed, but had served valiantly during the Yom Kippur War on the Golan Heights. We retold the story of how his 17 year-old sweetie slipped out of the house one night and took the family car to the Heights in search of him. To see if he was alive. To bring food and drinks to her schoolfriends in battle. Incredibly dangerous and stupid, but daring and romantic nonetheless. Ze’ev and Liora were married shortly after the war. We visited the grave of young Alon Bacal, 26, terrorist victim.. And there were so many of his young friends there who had come to pay tribute. In all,     people have lost their lives to war and senseless terrorism since Israel’s founding. We have spent the past 24 hours, listening to the stories of these “ordinary/everyday” men and women. Of the tremendous debt paid in violence and bloodshed in order that we may live freely here. The only true Democracy in the Middle East. Where Arab women can vote, drive, and work. A place that is home to refugees fleeing wars from Sudan to the Ukraine. A country made up of people from every country returning to the Land in a modern-day Exodus. Those new immigrants, too, who know that their sons and daughters will be serving in the military – some, like us, sooner than later. We know the great price that was paid and will continue to be paid just to be able to call this place home. 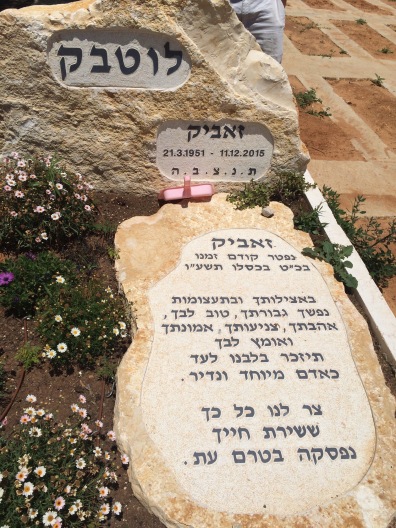 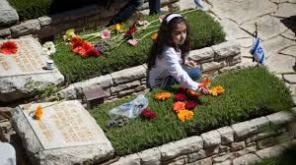 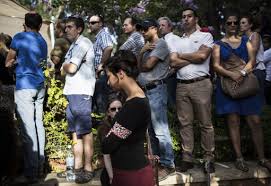 So that is why Memorial Day is the day before Independence Day here. Everyone, from the youngest to the oldest knows the cost to make a great country. The effort and the sacrifices, many times ending in bloodshed. Many times, for no apparent reason. It makes Independence Day more meaningful, especially knowing that the 1948 War for Independence in Israel was fought right after the radio proclamation of our Declaration of Independence. When all of the neighboring Arab countries attacked the tiny nation made up of pioneers and Holocaust survivors with the most minuscule and ragtag army. 10% of Israel’s entire population was killed during that short war, but with G-d’s help. this nation prevailed. It is something ingrained in the heart and soul of the people, and something that is passed down in a well-thought manner to the next generations and to the newcomer. It is a lesson and model that the United States can learn from, as much has already been lost.

At sundown, Remembrance Day turns into Independence Day through a special Havdalah or Separation Service. Psalms are read and our mourning turns to rejoicing. Everything good comes with a price. A new light, a new candle is lit (in Jerusalem torches are lit by 12 special contributors to the nation). The country sings the national anthem, HaTikva, the Hope. Fireworks resound in every community. And the party begins!!!!!  (this year Karmi’el was privileged to host Hatikva 6 as the Headlining act)

2 thoughts on “Memorial Day:Could the U.S. Have Done Better?”