We decided to take our daughter, visiting from the States, to the Dead Sea area on day two of our Jerusalem journey. It was the only forecasted break of sun during the cold and rainy week. Our first stop was Masada. This immense mountain plateau rising from the desert served as a crazy-intense building project by King Herod. It was his getaway luxury palace for weekends away from Jerusalem. Built onto the plateau and down the cliffs, there were deep cisterns for holding fresh water (he was the first to really recycle used water), storage houses, bath houses, dovecotes, a fortress, a synagogue. After Herod’s death and the destruction of Jerusalem by the Romans in 70 AD, Masada was the scene of one of the most remarkable and tragic last stands for independence by the Jews against the Romans. A band of Jewish patriots and their families, also including Essenes and Samaritans, under the command of Eliezar Ben Yair, 960 people in all, held out under a siege that lasted months. After constructing a ramp, the Romans rammed the walls. Heavy fighting ensued with many Jewish lives lost. When all hope was but lost by the remaining few, and Romans setting fire to the interior, a decision had to be made. To be carried off as slaves by the Romans or to die as free people? Lots were cast with names, easily readable in Hebrew today, about who was to die last. Only two women and five children, hiding in abandoned water vessels lived to tell the story to historian, Josephus Flavius. The rest died – but they were still free.  We took the cable car up to the top of the mountain and enjoyed the history and panoramic vistas. Clicking the pictures should give captions…)

View of the plateau and palace remnants on the cliffs

The bricks were heated with coals causing the water under the floor to heat up, escaping through the wall vents as steam. Ancient spa…

Back in Jerusalem for late afternoon, we strolled Mamilla, the upscale shopping and dining open air mall outside the Old City. I love all the art, available for purchase!

Our trip to Jerusalem would not be complete without a full tour of the Old City. I’m not sure if it was because of the cold rain, or recent spate of terrorism, but everything was still unusually empty – especially for the week before Passover. We were very careful to avoid walking through the dark shuk, but we toured the Armenian, Christian and Jewish sectors. At one of the Via Dolorosa stops, we dodged the pouring rain and ran into the Austrian Hospice for Viennese Coffee. The rooftop proved a great place for spectacular views of the Holy City.  We were  very lucky to be there to see the cleaning of the Kotel wall, done only twice a year, before Rosh Hashanah, the fall feasts, and Pesach, the Spring Feasts. All the notes and prayers, pleas and hopes inserted into the cracks of the Western Wall are gathered and buried in the Jewish cemetery on Har Zeitim (Mt. of Olives). Only one note was ever saved – the note Sen. Obama wrote was taken out. I have heard several rumors in the past week as to who removed it; what it contained; and its exact location now. Also, we were able to see a whole army battalion come for prayers and songs. They were gracious enough to pose for a picture. Once again, we took a rain break and toured the underground excavations of the Kotel Tunnels. Archaeologists have unearthed the foundations of the Temple walls including the gate that led to the Temple, the closest one can get today to where the Holy of Holies stood. 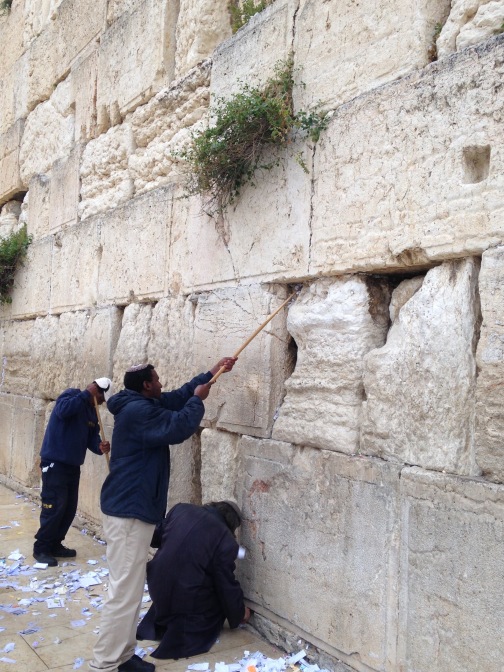 Cleaning the notes from the Wall 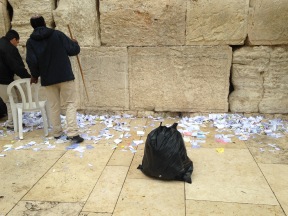 The notes are put into bags and are buried at Har Zeitim (Mt. of Olives) Cemetery

Spring cleaning at the Kotel

After prayers, the soldiers huddle to do cheers 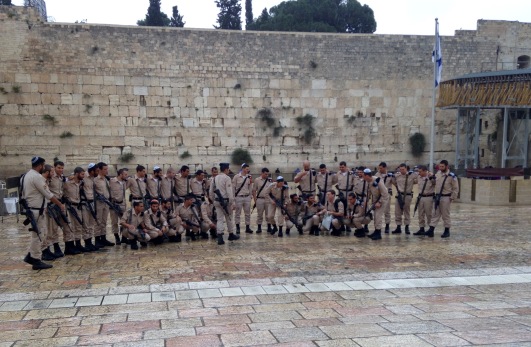 ISF troops gather at the Kotel 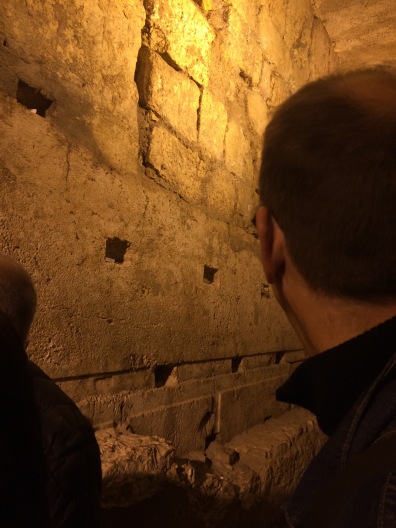 Atop the Austrian Hospice with Liz

The last part of the afternoon, the sun started to peek out. And with the sun, came a whole procession of musicians and paraders rejoicing in the holiness of the place. It’s really what Israel is all about. Join me for a few seconds in this video clip:

Day 3 we went back to the Old City to take the David’s Citadel Museum and Gardens tour. This is a must -do and ranks pretty high on our list of places to visit. It gives a whole overview and history of Jerusalem through artifacts, art, history, writings, and culture. Leave a good couple hours for this one. At the top of ‘David’s’ Tower, are the most spectacular views of the Old and New parts of Yerushalayim.

View into gardens from the City of David

Yerushalayim looking towards Mt. of Olives from Tower of David

Panorama of modern Jerusalem from Tower of David

Our afternoon was capped off by driving around modern Jerusalem and a Mechane Yehudah Shuk  scavenger huntfor John and Liz, and Passover shopping for me. Items to find: 64 different flavors of Halvah at Halvah King (the most delicious sesame seed, honey candy); the portraits of grafitti pop-artist Solomon Souza; the Tehina King ( I bought 4 tubs of Chimmichurri Tehina); Health Juices; the Kippa (yarmulke) man; a beer brewery; the Rabbis’ offices – Kosher market requires rabbis of different denominations on hand.All in all, it was another great adventure, especially running into teams of IDF soldiers on their own scavenger hunt as a team-building exercise!!!

We found the fabric poppy streetlights

and Golda Meir by Solomon Souza

Moshe at the cafe watches passers-by

Pigging down on pastry before Pesach 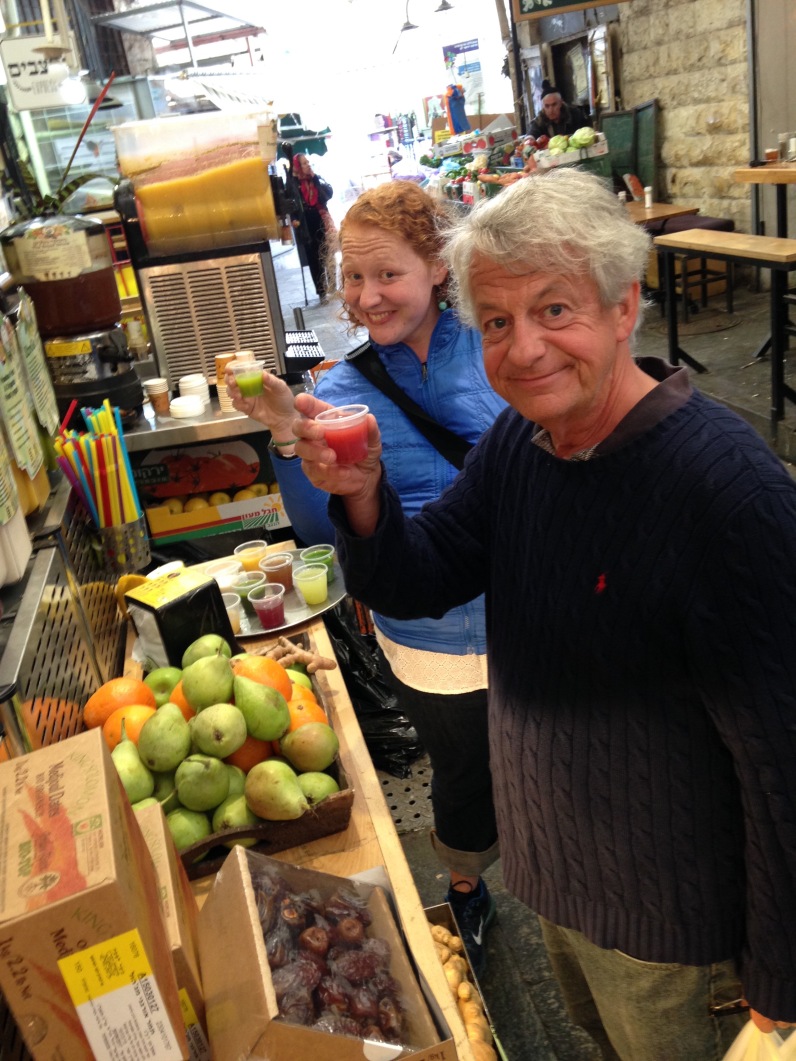 Had to leave early to make it up to Max’s Mechinah by dark. You see, we decided to drive through Judea & Shomron up the 90 freeway. Also known as the West Bank, area C, routinely patrolled by IDF and “open” to all, just be careful. An exciting and beautiful ride near Gilgal, Jericho, past Ramallah, past Jenin… but it saved us the extra hour and a half drive around the country by going through and not around. It’s not something we usually do…but… all is fine, we caught one of Israel’s gorgeous rainbows – this time over Jordan. And made it to Max’s to deliver his requested items – next post – The North. 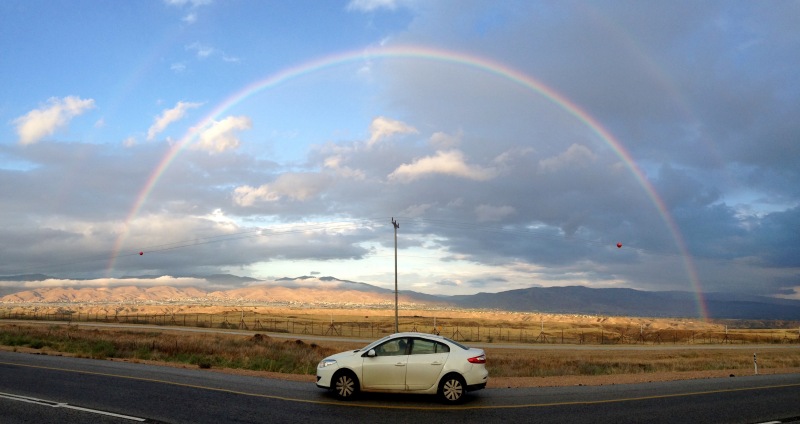 One thought on “Elizabeth Goes to Jerusalem Part 2”