B’Midbar Into the Wilderness

When we lived in California, this was our time to go into the desert… sometime before Passover, before all the busy work starts. It’s a good place to get perspective. Usually it was Death Valley or the Mojave or Arizona. This year, we decided to take on the whole Exodus experience: the Negev! Imagine being one of the Children of Israel being led by Moses, Aaron, & Miriam… all the way to the Dead Sea and then back North.

To orient you, I’ve included a map (typical homeschool mom!). Karmiel is in the North, just above the “T” in Tiberias. You can make a five hour non-stop drive from the very north all the way to the southern tip at the bottom of the inverted triangle – Eilat – between Egypt and Jordan.The Negev starts at Beersheva and covers more than half of Israel’s land area, yet is still mostly a wilderness, very sparsely inhabited by semi-nomadic Bedouins and stalwart kibbutzniks. Only 8% is inhabited – for good reason.

Our first stop, was a small kibbutz southeast of Beersheva, Sde Boker, home and grave of the first Prime Minister of Israel, David Ben Gurion. His dream was for the Israelis to bring this barren, arid desert to life. In 1948, he envisioned settlers, farms, and the future of Israel to the South (it’s slowly happening…). He and his wife, Paula, settled here after his term as PM as an inspiration for others to follow. An Israeli George Washington, as one of the Founding Fathers of modern Israel, he was more interested in history, philosophy and farming than politics. His life was a humble one, as his tiny hut on the kibbutz shows. With walls lined with over 5000 books, his modest living room saw many great world leaders including Ghandi.

A few miles south of Sde Boker is the tabletop plateau of Ein Avdat, gateway to the Zin Desert. On this mesa, are the ruins of an ancient city, built as a resting place for camel caravans traveling the Spice Route between Petra and Aza, later inhabited by the Byzantines. It was first settled by the Nabataeans in the 3rd Century BC. In the first century, they intermarried with King Herod’s family. Most of the ruins, however – the town, fortress, and church date between the 3rd and 5th centuries AD(Byzantium), before it was sacked by the Persians – only to be discovered again in the early 1900s. From atop the acropolis, you get sweeping view of the Negev, including the wadi that formed the ancient Spice Route. It didn’t take much imagination to envision camels laden with gold, exotic spices, and jewels heading West. The most interesting part were the ancient caves dug into the side of the chalk and limestone mountain. We just had to stop and explore every chamber, niche, and cranny of one of them. Completely white inside. Dry and dusty. Cool in summer, warm in winter. Were they leper holes? Shelter from invaders or the extreme desert elements? Places to get away and meditate? I’ll take the latter….

Window to the Wilderness

Looking into the desert wadi at the winding spice route

Entrance to one of the rooms in the cave

Not enough time to meditate

No, there was just not enough time to take it all in as we had to journey south into the Negev: nest stop, Mizpe Ramon. The Ramon Crater is a lookout point of sweeping arid vistas. Much like the Grand Canyon in Arizona.

Panorama of the Ramon Crater

Maktesh Ramon is an immense depression 40 km (25 mi) long and 10 k wide (6 mi). It is the only natural formation of this kind in the world, formed as the mountainous region caved in on itself (chalk and sandstone) millions of years ago. With steep cliffs surrounding, the floor is an otherworldly landscape of sand and black basalt push-ups from extinct volcanic activity. Remote, eerie, and exhilarating. It’s easy to see why Mark Twain on his visit to the Negev wrote, ” it is a desolation that not even imagination can grace with the pomp of life and action.” Yet it was here that Moses led Israel in her wanderings for 40 years. Can you just imagine it??? We climbed up the steep cliff to the lookout point, and as usual, as I fought to keep up and keep the vertigo away, John scrambled along the edges of the recipes like one of the mountain ibex that inhabit the land. There are no barricades as at the Grand Canyon. Yikes! But the views were well worth the trek!

My brave and adventurous husband

View into the crater into the desert

Once again, not nearly enough time. We shall come back in June so Max, our resident astronomer, can visit the world-class Wise Observatory at night. It was late afternoon, and we wanted to be in Eilat by nightfall. On the way down the mountain, we had an unexpected surprise. On the side of the cliff, IDF rescue unit soldiers was training a group of citizen volunteers rappelling down and up the steep face of the mountain carrying stretchers. They were so friendly, and didn’t mind at all that we stopped to film them, chat with them and cheer them on. What courageous  guys!! True Israeli heroes!! There were four teams in all… 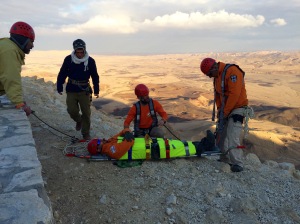 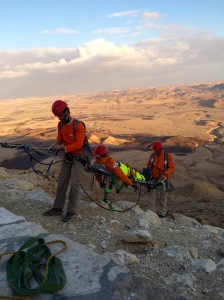 With shadows growing longer, we made it into the chasm, and here could experience the floor of the mahktesh directly. Wow!

B’midbar – in the wilderness

Sandstone Mesa in the Negev

We finished the first part of our six day journey well after dark, tired and ready for the Eilat experience. Eilat is the southernmost Israeli city, with a population of 60,000. A veritable Las Vegas Oasis in the desert(minus the casinos) with lights, hotels, restaurants, entertainment, recreation and spas. Eilat is situated on the Gulf of Eilat, where the land meets the eastern prong of the Red Sea, lying between the Egyptian Sinai Mountains to the West, and the towering red Edom Mountains of Jordan to the East. You can see the mountains of Saudi Arabia below Jordan along the horizon. It is a crossroads between Asia and Africa, and it was here where the Children of Israel crossed the sea. King Solomon’s mighty fleet was stationed here, later to be conquered by the Persians, Romans, Byzantines, Arabs, Crusaders, Mamaluks, Ottoman Turks and British.

Ever since I was a teenager, I have longed to visit Eilat. With crystal clear turquoise water, it is home to a natural coral reef just teeming with tropical fish – and that means great snorkeling!!! Another dream come true! The first day, we rested, toured the palatial hotels and taking a glass-bottom boat ride. Lovely. Another highlight of the day was the foot spa, where little sucker fish give you a pedicure…. really fun.

A view of the city 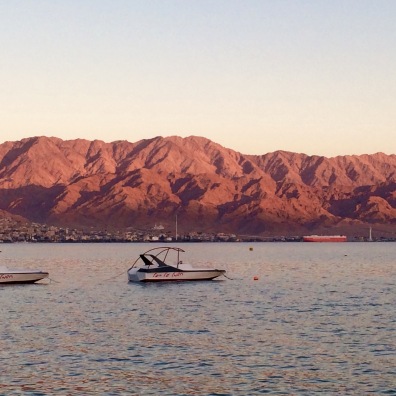 This ends the first part of our Wilderness Adventure. Hope you’ve enjoyed yourself as we journey together. I shall post part two tomorrow – snorkeling; a near arrest (for truth! I almost made it a year without getting into trouble..and I promise you a great story – for you, not me!); camels and bedouins; G-d’s amazing and gorgeous diversity in creation; the Mishkan in Paran; and Sodom & the Dead Sea. Stay tuned. It only gets better!!!

2 thoughts on “B’Midbar Into the Wilderness”