There are days when, I must say, I do get “homesick.” There are people, places, products – and celebrations – that I truly miss. So, imagine my surprise, when a few weeks ago we received an invitation to a Robert Burns dinner. Back in California, we celebrated my husband’s heritage heavily. My children were  Scottish Highland dancers, and we would regularly attend festivals, competitions, and other celebrations. One of our favorites was the annual Burns Night in January. A bright spot in the gloom o’winter. It was just another thing we said goodbye to as we left America. Surely there were no Scots in Israel!!! Wrong!

Robert Burns was the poet laureate of Scotland. He lived at the end of the 1700s and was very prolific in his writings (Auld Lang Syne, To a Mouse, Scots Wha Hae, My Love is Like a Red, Red Rose). There are even a couple old “stories” passed down through my husband’s family. The first is that John is a direct descendent of Burns; the second, that the Dunbars were part of the wandering tribe of Dan in the Diaspora. Hence, Bar-Dan became Dunbar. Despite the driving, cold rain of last Saturday night, John donned his full dress kilt, I my tartan sash and jacket and we set forth for the party. And we were not to be disappointed. There were several members of the Karmi’el English Speakers Club ready to try the varieties of single malt Scotch; address the haggis (kosher!!!!); and recite the poems of Burns. The bagpipes were a skeerlin’, the haggis reekin’, and the company full o’meerth. Who’da thunk that here in Israel, we would continue the old traditions!!! G-d surely has not left out one detail in seeing that our landing was a soft one! After the haggis (this one made with ground lamb and pinpoint oats…the only time I’ve ever been able to eat it – and it was delicious!) was ceremonially piped in and the ode to the haggis was recited, our gourmet Highland meal was served… with salmon, tatties and neeps (potatoes and turnips), bashed peas, and for dessert – Dundee cake and shortbread with Scottish tea! I performed a dramatic Scots Wha Hae, our hosts did a rousing Tam O’Shanter. Some did spoofs (90 year old, Jack White recited the bawdy To a Fert). Uproarious! 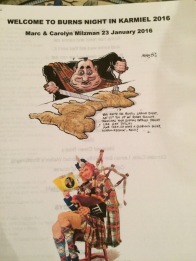 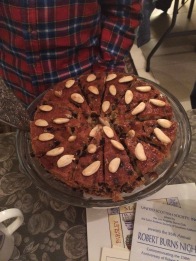 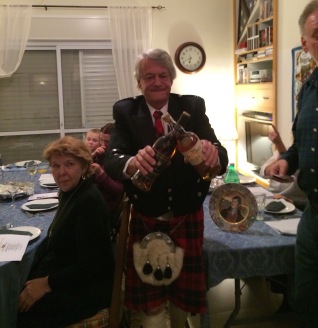 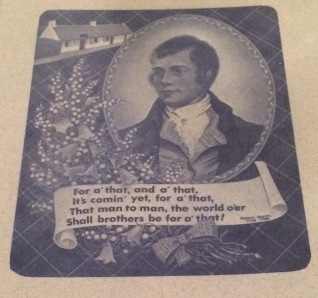 Despite the wind and intermittent downpour, Israel has been readying to celebrate the (fairly new) holiday, Tu B’Shevat. This is not a liturgical celebration, but a national holiday, first started here in the early 1900s. It was the first Earth Day of its kind. Israel was either desert or swampland in its early modern period. Besides, the draining of swamps, irrigation needed to be brought to the arid places. Trees had to be planted. Useful trees to provide not only shade and wood, but food. With lots of hard work by the pioneers, the land soon began to become green and productive. It was miraculous. Today, we celebrate by planting trees, fruits, vegetables and flowers. the rain-softened land is easier to plant at this time of year. Also, we celebrate by learning the importance of being good stewards of the earth (reuse, recycle, take only what is needed, and replace what has been taken). and of course, by eating. All Jewish holidays seem to center around the family and the table. And, naturally, we are thankful to G-d for his bounty and provision.                                                                                                          For the Lord your G-d is bringing you to a good land, a land of streams and water, waterfalls and seas, that emerge in valleys and mountains, a land of wheat, barley, vines, figs, pomegranates, a land producing olives and honey, a land in which you will eat bread without scarcity. You will lack nothing in it…and you will eat and be satisfied, and you shall bless the Lord  your G-d for the good land He has given you.  Deuteronomy 8:7-10.

The holiday, Tu B’Shevat, gets its name from the date. It is observed on the 15th day of the Hebrew month, Shevat  (Yes. We have two calendars- Hebrew with the Hebrew letters which are numbers, ancient names of months and days and year, and Gregorian. Very complicated here as we use both!!!!) I was first reminded of the upcoming date at the grocery stores, which were getting ready by marketing their produce. It is customary to eat fruits and veggies, those that grow on trees, and those mentioned above, fresh and dried – and nuts of all varieties. Two weeks ago,  in the park adjacent to our neighborhood, there was a huge community planting party. Everyone showed up, young and old alike, to plant bulbs and fruit trees. It was glorious!!! The weather was Israel perfect (think Southern California). There was a DJ blasting out the best music (songtracks from my life)which could be heard for miles; there were recycling stations; entertainment for the masses; craft stations for the children (imagine little kids with hot glue guns and found objects from nature. I think there are laws against this sort of thing in California); and lots of fresh, organic produce to eat: all in all, the perfect ingredients for another perfect day! Besides planting spring bulbs, I planted a fig tree in honor of our very dear California friend (and “zayde”), Lou Schotland, an Auschwitz survivor. I hope one day soon he will come and eat of its fruits! 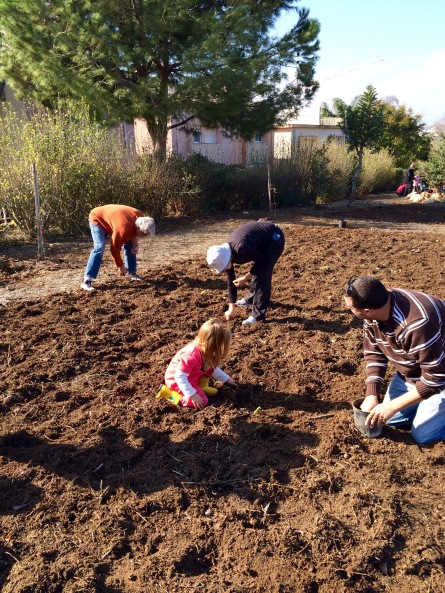 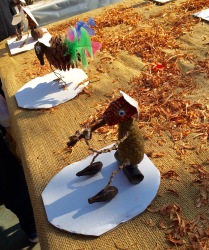 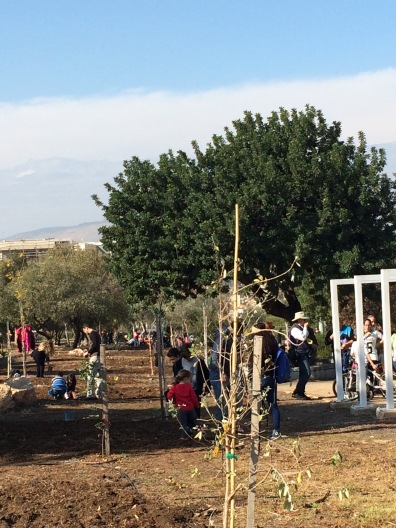 Also last week, I took my first all-Hebrew cooking class, led by my neighbor and holistic health-practitioner, Yael Cohen. Without the medications and supplements I took in the US to control my MS, I’m altering my diet to an organic, vegetarian diet for the most part. No gluten, sugars, processed foods, red meat. Taking the class in Hebrew was definitely challenging, but I surprised myself by keeping up. It was fun and tasty too. So I’ll share some of my Tu B”Shevat decorations and menu with you!

I can read!! Foods and recipes to fight Chronic Fatigue Syndrome! 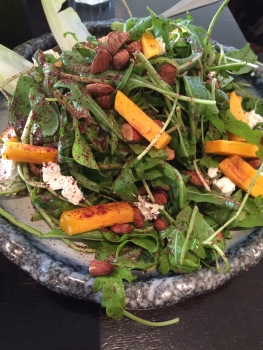 Salad with mango and sumac 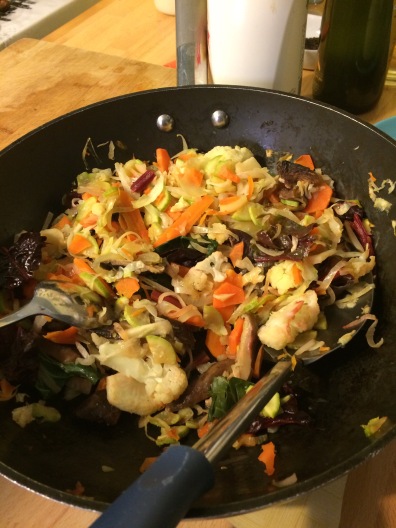 For Tu B’shebat, it has become a recent tradition to hold a Seder meal. Present are the Seven Species of Fruits and grains grown in Israel. A special blessing is said over each. There are four glasses of wine throughout the vegetarian meal: two red for fall and winter, and two white for spring and summer. First, for the table. These days, I can’t afford to go out and buy an expensive centerpiece, so I used what was on hand. Thankfully, I had brought my fruit tablecloth and china with me from the States. I’ve saved all our wine corks since we’ve come, hoping to eventually use them in craft projects. So, now was the time to put them to use as both a candleholder centerpiece, and a celebration of the fruit of the vine. It’s so easy!!! Just take two cylindrical glasses or vases of varying size; line the outer circle with corks; put a votive in the middle; tie a nice bow; voila! I surrounded the candle with fruits and nuts. Lovely! 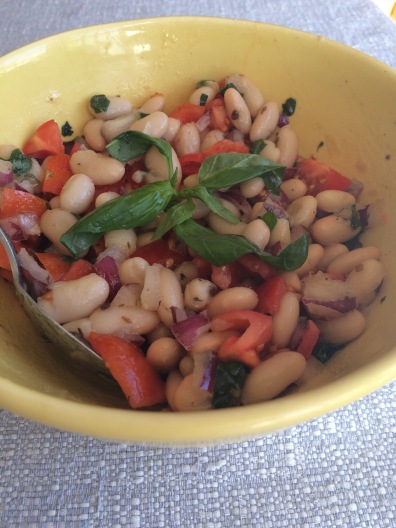 Roast the beets in a 425*F oven (220*C) until soft. Let cool a bit, then peel and slice into bite-sized pieces. Grate the rind of one navel orange. Set aside. Juice both oranges. Stir in the cornstarch until well mixed. Place beets in a medium pot. Pour in orange juice and cornstarch and cook on medium heat until it comes to a soft boil. Add the spices and silane or honey, and lastly, the orange rind. Set heat to low, stirring until liquid turns into a nice glaze. Serve hot.

Even though lentils are very Middle Eastern, I prepare them in a Tex-Mex way. Interesting story. We’re from LA. That said, you’d never know who would show up where. It just so happened that the CountryPop singer, Glen Campbell and his family loved Judaism and would often come to the services at our synagogue (he could play a mean Hava Nagila!!!). He was a lovely man, and he loved to entertain the kids with his Donald Duck impressions. Max & Glen really hit it off, although my son had no idea who he was or that I had a crush on him from his True Grit movie character ages ago. Anyway, I would take this lentil dish often for the seudat slishi (third meal/lunch) at the synagogue potluck, and Glen loved them!!! Hence, the name Cowboy Lentils. I gave the recipe to his wife, Kim, so he could enjoy this protein packed dish at home….

Rinse the dried lentils and place in a medium pot. Pour in the water to cover and heat on high until boiling. After they boil 2-3 minutes, cover and turn heat to low until the liquid is absorbed.Fluff, rinse under cold water in colander in sink, drain well, and transfer to medium-large serving bowl. Add the rest of the veggies and mix well. In separate bowl, combine the sauces, then add to the lentil veggie mix and stir well. Add salt and pepper to taste. Serve cold, room temp or warm. Excellent left-over lunch, too! 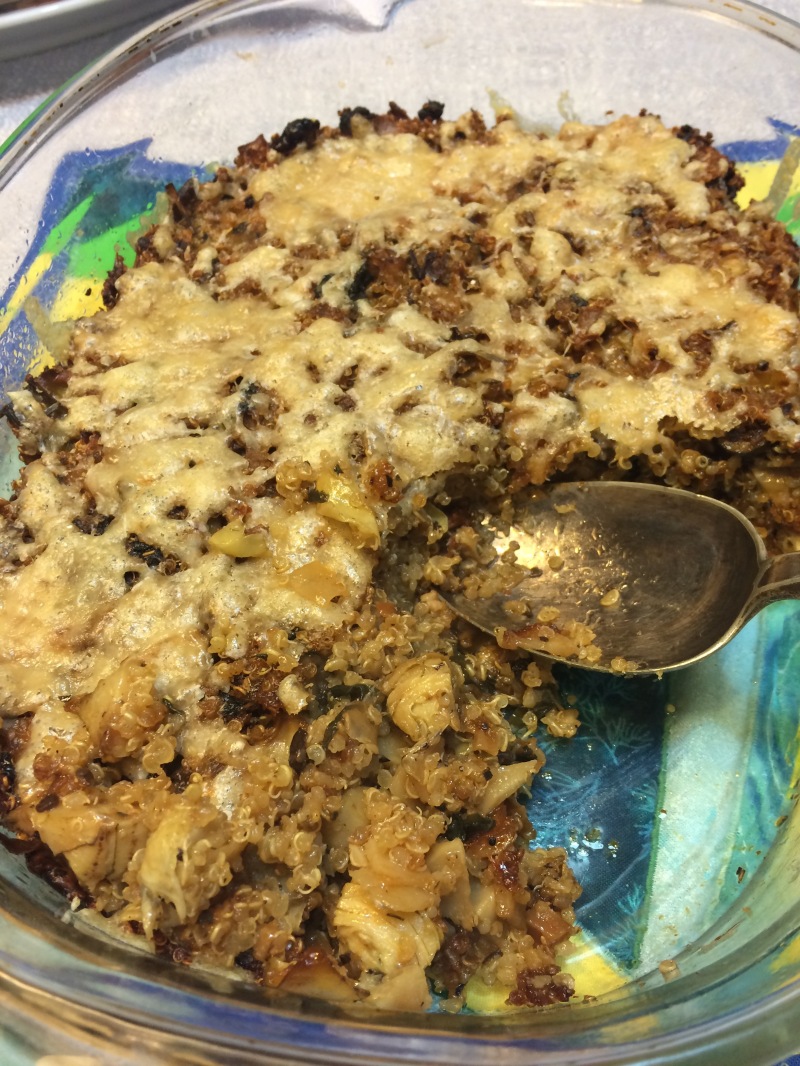 Take the quinoa and cook a cup according to package directions. While the quinoa is cooking, chop artichoke hearts and sun-dried tomatoes, reserving oil. Place cooked and fluffed quinoa in baking/serving dish and add the artichoke hearts, tomatoes, olives and oregano. Stir in cheesesn( save 1/4 cup Parm for top) and left over oils from tomatoes and artichokes to nicely moisten. Add salt and pepper to taste. Sprinkle the 1/4 cup Parmesan on top and bake at 350 (180*C) until the cheese is melted on top and nicely golden. Sprinkle fresh basil on top and enjoy!!! Great as leftovers too!

John harvests the last turnip from our balcony garden!