This is another difficult post to write for so many different reasons, but hopefully, it will not be misconstrued and will give some hope for the future… I know that it will be controversial for many. But I must share this story.

This past week has been an understandably trying one for the people of Israel. We have been experiencing seemingly random terror attacks throughout the land. It started when we were in Yerushalayim, with the initial murder of the young couple in their car in Disputed Territory as they were driving home from dinner at their parents’ (with four young children in the back seat): the initial stabbings in the Holy City; the car ramming into an innocent crowd. It was just the beginning. The Palestinian leader, Abbas had changed the narrative (my next political post will be on this) from a territorial fight to a Holy Fight for the Temple Mount. He called upon the blood of martyrs. An imam televised a broadcast from the parapet of his mosque and pulled out a very long knife (it was not a kitchen knife!!) and proclaimed a time for the radicalized to go forth and kill Jews. And the Joint List Arab members of Knesset, who have full representation in government here in Israel, called for Arab justification and solidarity in this uprising. Thus began the escalation. Even up here in the North, where we are completely surrounded by once-peaceful Arab towns, the JL members came to hold a rally of 20,000 in the town of Sahknin – in the valley right across the mountain from our home. And to add to this, there has been increased “noise” and stray rocket fire from the Russian/Syrian fight with ISIS into the Golan less than 30 miles away. And lots more IDF presence.

The atmosphere here has changed overnight. No longer do people stroll the streets on leisurely walks. Especially in the Yerushalayim area, in many instances, people are only venturing outside when necessary. No longer do you see people walking with phones in hand, or earbuds in. Everyone is extremely alert. Stray bag on a bench? Possible bomb…. Look into the person’s eyes coming toward you. Can he be trusted? Do I have pepper spray in my pocket ready to pull out in a moment? Stand a little behind a bus stop, not in front of or along side, so I can see the car as it careens toward us and get away in time. Where is the nearest entrance/exit to or from a public building? The land is much more quiet than usual. I am praying that a SPIRIT of fear will not take hold in these people. Awake, alert, yes. Fear no!!! I had a long conversation with my friend in Ranana who was afraid to leave her home. Afraid to take her son to daycare for fear she would never see him again. Afraid for her husband driving into Yerushalayim to work. She could not sleep, could not eat, did not want to let go, felt frozen. She wants to go back to Southern California. Understandable, but not healthy.  There are special hotlines and mental health groups for people who cannot cope. What to tell the children? How to recapture a sense of “normalcy” in life. The feelings of abandonment – by friends and neighbors, by formerly friendly countries, by the government, by the world. I’ve heard and read so many stories. It’s pretty horrible. But there is hope!!!! So here is my story for today:

I’ve just moved to a new land. The first day of Ulpan, in my new Hebrew class, a lovely young girl sits across from me. She really is lovely.  The class is filled with immigrants, mostly Russians, some from other lands, some very Orthodox, most secular. It was before the huge class was split into groups… anyway, there she sat, in her hijab – she wore a long black robe over her clothes. It fully covered her body. Her lightly colored headscarf concealing her hair and her neck. We looked at each other that first day… and smiled awkwardly.

I never, ever expected to be writing an article like this. I’m certainly not an extremist, but becoming friends with an Arab (a Muslim!!!!) was the farthest thing from my mind. I just never thought…. well, here we sat say after day. And we’d smile at each other – and then one day we began to say “good morning” and “see you tomorrow.” It did help that she was one of the few who was completely fluent in  English. Still – it wasn’t ‘natural’ or completely ‘comfortable’ for me. After all, she was ‘the enemy,’ nu? We began to talk at break. Fatima was really nice!!! She had moved to Israel from Amman, Jordan to marry an Arab Israeli man, three years prior. She was very well educated, having studied at the best schools. She was very young, but at 21 had graduated university with degrees in accounting and finance, then came to Israel to get married. She had also left behind all she knew to come to this foreign land. When she was 22, she gave birth to a little girl. Even though she was an Arab Muslim woman in a Jewish land, she was excited that she could learn to drive here, hold a good job here, contribute to Israeli society. And, yes, she faced discrimination at times from the local Jewish Israelis. I was the only one who dared befriend her.

We were hesitant at first, but we both loved to cook, and food became the neutral, yet binding element in most of our conversations. I loved to chat with her each break about what she ate, how she cooked a certain dish, where she shopped. She lived in one of the neighboring towns about 20 minutes away, and knew of some really good spice and produce markets. One day she surprised me with bottles of rose water and orange blossom water – not only good for cooking, but as a face rinse and hair rinse. She would accept no money for them. So I gave her homemade applesauce using the rose water – and jars of jams. We shared pictures of our daughters. We shared what we missed most about home. It seemed like we had quite a bit in common. She was just so sweet!!! She became pregnant with her second child, during our second month of class, and we talked about remedies for morning sickness. We shared our hopes and fears for the future of our children. Even though we still kept our conversations mainly to food, eventually religion kept in. At break, would sit together at a nearby cafe every day for first 45 minutes, then at our second break for 20 minutes. Sometimes we would get “interesting” looks from passers-by, but most people gave our being together no notice.

She was interested in Judaism – and Christianity – and America – and the Western way of life. I began to ask her about her faith. She cared neither about Sunni nor Shi’ite. She thought it was important to live a virtuous life, being a good person, respecting life, looking beyond the outside. Wow!!!! Amazing!! I was really growing to love her and treasure our friendship. I had many questions for her, some things she could not answer. She believed, too, in good angels and bad angels always pushing a person in one direction or another. It was a lot like the Yetzer-Ha-Tov and Yetzer Ha-Ra good and evil inclinations of Judaism/Christianity. She understood the idea of living a life of balance, and that it is when one becomes out of balance, that radicalization and fanaticism steps in on both sides of our cultures. She was completely unfamiliar with the concept that G-d loves her. For her, it was solely the person’s actions that warranted the attention and future reward/recompense from Allah. A concept she had grown up with. It was unfathomable that G-d could love a person just because He made that person (in His image) – like a mother cares for her child And we would share a recipe or two… Fatima was a true Romantic at heart. We both loved to cry for no reason at American romance movies. We both loved “Sleepless in Seattle.” We both believed we had found in our husbands a hero, the perfect mate, sensitive, and strong, with a great sense of humor. And what ingredients go into the perfect fattoush?So tell me about this holiday you will be celebrating? What does it mean? What do you do? And… of course… what do you eat???

The months fly by. Fatima’s baby is due at the beginning of the year, and she is beginning to confide in me her fears of giving birth again … I try to allay her fears. Things will be all right. Have you taken classes or do you know breathing and relaxation techniques? Will you nurse the baby? I can visibly see how the heat wave and dust storm of the past summer have taken their toll on her. She is the same age as my youngest daughter. Like a mom, I remind her to eat protein and keep hydrated. We call each other up when one is absent from class just to check in… we have become really, really good friends. We like each other a lot.

Last week, our final week of class after six months, the week before our three hour final exam, was the week the “wave of terror” began. The week young thugs began hurling flaming tires and cement blocks onto cars at intersections… even right outside our town. Not only was it potentially dangerous for me to travel out of the town, it also posed a threat for Fatima to travel into a Jewish city. After the news of the latest attacks, would the Jewish people even let her pass? Everything is changing for the both of us. She had invited me to the town where she lives for lunch at a cafe next week. It happens to be adjacent to where the big Palestinian rally was held. We are now both afraid to be seen together over a cold glass of iced tea at these popular sidewalk joints. I’m afraid for her. If she is seen fraternizing with a Jew, could harm come to her??? G-d forbid!!!! As for myself, I do not want to travel into a potentially hostile environment. She does not want to put me in harm’s way. I do not want to see evil come to her or her family (she’s told her husband of our friendship. He wanted all of us – Fatima, Musa, John & me – to go out to dinner together at the restaurant of our choosing as they know I keep Kosher). We are each more concerned about the other’s well-being.

The last day of class was really difficult. We didn’t care about staring eyes as we embraced. We prayed that more people would see “beyond the veil.” We will call each other regularly. We will keep up our friendship. We will pray in our own separate ways for an end to the baseless violence, for a time of peace between both our peoples. I will be there when her baby comes into this world… and even though it’s only a few more months away… I pray it will be a more peace filled land. 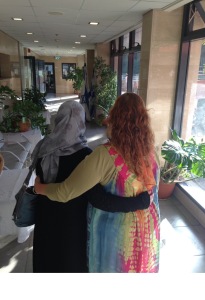 Let there be peace on earth, and let it begin with us!

7 thoughts on “Beyond the Veil”