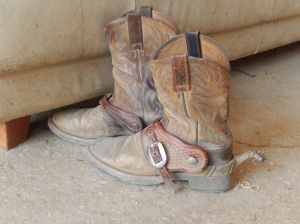 We had heard about the Israeli Dude Ranch experience, but never expected this!!! Last week, John and I took Max to “Mekhanei Cayitz”, Hebrew for summer camp, and then decided to have our own fun in the mountains overlooking the Galilee. Actually we were in search of a small indie brewery that sells beer-making kits. Instead we stumbled upon Vered HaGalil (Rose of the Galil), and thus the adventure began. As some of you know, we had opted to move to McKinney, Texas if the Israeli Aliyah did not come through, and now we were deep in the heart of “Texodus!!!” A complete working dude ranch with cowboys, stables, horses, riding trails, riding rings, tzimmerim (small getaway bungalows for daily-monthly rent, like the U.S. B&B) and a steakhouse! For reals!!! So – here are some pics I took – welcome to Israel! Who knew???

Rose of the Galil Ranch

The mailbox – “Post” in Hebrew lettering on the handle: How lovely!

The stable had a mezuzah! Kosher cowboys!

The cowboy boots even had spurs

On our walk around the ranch, which was huge in acreage, I even saw my first mongoose. Wow! Texas meets Rikki Tikki Tavi: now I knew fer sure we weren’t back in the States. And it was a good thing too. There are lots of the little critters scampering around these parts – and they keep the viper population down. Yup, there are venomous snakes in these here parts, and we’d heard some pretty scary stories in the past couple weeks. Thank goodness, all we spied were the mongoose families…

John and I talked to the owner of the ranch about beer – and figs. It just so happened that he knew a guy, Ariel, the next town over who had an orchard of figs growing in his back yard. So we took off for the tiny village of Korazin. That struck a deeply hidden Biblical gem: wasn’t that the place associated with an ancient curse? “Woe to the residents of Korazin” kept rattling in my brain… it turned out to be amazing. This is the prettiest gate-guarded community of private homes looking like they just popped in from the hills of Santa Barbara. Many of the residents have lived in this village (with sweeping views of the Galilee below and the mountains to the North and West) for over 50 years. We pulled up to one home, and an elderly gentleman and his wife gave us directions to the house down the street – but not before inviting us in to his craftsman-styled home to talk and have a cold drink (did I mention it was 102 degrees??). As it turns out, Yossi had been a young pioneer from Hungary who lived on one of the earliest kibbutzim. He fought in the 1948 War for Independence, and remembered Moshe Dayan as a young kibbutznik. He was still a strong and strikingly handsome man. One wall was filled with pictures of him and famous generals and Prime Ministers, alongside those of his family. Living history.

After thanking them graciously and promising to return (I was speaking all in Hebrew at this point!!!), we made our way to what we thought was Ariel’s house. It turned out to be 92 year old, Devorah, the resident postmistress for the community. Devorah, too, was active and spry – and we hit it off at first sight!!! She was from Poland, and is an Auschwitz survivor who also came to Israel right after the Holocaust. We talked a little about her history and family, and a lot about my leaving my girls back  home to come on this grand adventure to Israel. She spoke not only in Hebrew, but in Yiddish, the language my parents spoke at home. It was the first time I heard (can’t believe I understood most of it) my mom & dad’s language spoken like this since I was a little girl. I began to cry, and she joined in with me, telling me how exciting our new lives would be, how blessed, and how brave we were. When I told her I cooked (and was looking for figs), she told me to come back and cook with her one Sabbath. You bet we will!!! And if my daughters are reading this, she has some cute grandsons who she’d like to “fix up…..”  Typical Jewish grandma! My only regret is that I left my camera in the car. Next time-

We left Devorah’s spacious 3 story, white stucco home with red-tiled roof (did I say Santa Barbara?) and headed next door to her son’s home: Ariel. The guy with the figs. Ariel, the youngest of her 9 kids, was gone, but we met his wife, Odahliah (Ariel means Lion of G-d; Odahliah, thanks to G-d). Everyone in this country is just so darned hospitable here – actually it’s a breath of fresh air. She invited us into her home, with 4 little tzimmerim in the back, and a pool! Asked us if we wanted to have a swim, but we opted to pick figs instead. She thought we were mishuggeneh, as it was now 106 degrees in the shade – no exaggeration! And pick we did. I never knew there were so many varieties of figs:Turkish, Mission, Calmyra, Syrian, Israeli. The smell was intoxicating!!!! Odahliah kept us filled with water, and would not accept any money for the huge basket we gleaned. “After all, you did all the work!!” She, too, had us promise to come back. 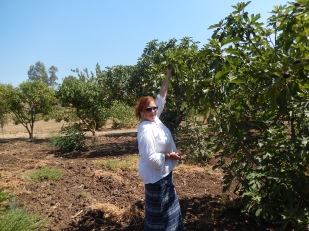 Never did make it to the brew house and pub. Late that afternoon, we returned home, worn out and hungry. I went to the North-facing den window and picked a fresh salad from the window box. I planted many different kinds of lettuces in this window, and now we have a nice selection of romaines, butters, forellenschluss, spinach, mesclun, and rocket. 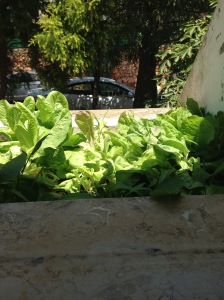 So, here’s a recipe for a delightful fig salad:

To roast the figs: spread out a sheet of aluminum foil. Wash and halve 16 whole, ripe figs. Place on foil and drizzle with extra virgin olive oil. Sprinkle with freshly cracked sea salt and freshly ground pepper. Fold up foil and place packet in a 400 * oven for 10 minutes. While the figs are roasting, wash and place lettuce on plates. Sprinkle with crumbled blue cheese bits and dot with walnut halves.Remove figs from oven and unwrap packet, being careful to watch for escaping seam. Let cool, and reserve the juices!!! Place 4 cooked fig halves on each lettuce bed. Pour the juice evenly over each salad, and add a tiny bit more olive oil, salt & pepper. For color, dress sparingly with grated orange rind. If desired, squeeze some of the fresh orange juice (just a little!!) over the salads. – Remember you can’t get bottled dressings here, so I have to be creative…. Enjoy!!!! 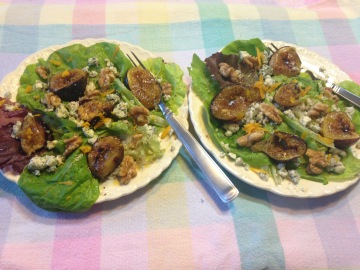