What a past couple weeks this has been!! Two Fridays ago, the women of our Conservative synagogue in Karmi’el went to Jerusalem for a study day with the women of the MASORTI (Traditional) movement throughout Israel. We spent the day singing, studying and attending lectures on issues of faith, family, spirituality, and life in Israel from a woman’s perspective. It was glorious!

Then, the following Monday, the combined Ulpan students took an all-day field trip – to Jerusalem. We visited the Knesset, drove through modern Jerusalem as our tour guide pointed out important highlights, and then wound our way to the Old City. It was quite a spectacle, as it happened to be Bar Mitzvah day. I’ve never seen anything quite as festive. We followed a few groups of 13 year old boys with their families and friends as they paraded their way to the Western Wall. Some kids were processing under white fringed chuppot or canopies. Others had accompanying Klezmer bands with the clarinets, saxophones, violins, and drums playing traditional Jewish music. I couldn’t help but sing along, as some of my favorite melodies were played. Some families held massive blue and white balloon bouquets. Some boys carried fully dressed Torah scrolls with velvet covers and silver breastplates and crowns with tinkling bells. After touring the major points of interest of the Holy City, we finally made it to the Kotel, the Western wall. I entered into the women’s section (the wall is separated by sexes by a large reticulated brass wall) and placed several notes in the tiny crevices. After a short time of prayer, I stood on a specially erected platform along the separation to see at least 20 Bar Mitzvahs going on in the men’s section. There were boys from the US, Europe, South America and Africa – all praying and celebrating by chanting the day’s reading from the Torah in Hebrew. It was such a treat!!

Entrance to the Old City:Jaffa Gate

Bar Mitzvah at the Wall

After a picnic lunch at a mountaintop park with spectacular views of the city:

our classes climbed aboard the tourbus to spend the remaining part of the afternoon at Yad VaShem, the Holocaust memorial. It was a most moving experience to walk the long museum from darkness as the story of the near destruction of European Jewry was presented in videos, artifacts, maps, pictures, and first-hand accounts – to the light of today and the new hope for the Jewish people in Israel. I just wish we had more time, as we only touched upon a few major parts of all that Jerusalem has to offer during this small introduction to the city.

We skipped class on the following Thursday to meet up with a group touring the Holy Land from Thousand Oaks, CA. Several of our long-time friends (and neighbors) were on this trip. We met the group on the shores of the Galilee, and it was a most beautiful reunion! I can’t begin to tell how much this meant to us to be able to join them. (Thank you to all who might be reading this for bringing me my medications and lots of other goodies from home!!!) We started out at the excavations at Magdala. About six years ago, a Catholic priest, Father Juan Maria Solana, had the vision to build a center at Magdala (home of Mary of Magdala) for interfaith worship and dedicated to the women of the world. Especially women who need spiritual, emotional, and psychological healing. As they were digging the foundation, they found a first century synagogue. This would become one of the most important archaeological sites in the area as it was one of the largest synagogues there at the time. Early on in the dig, in addition to the house of worship two exciting finds were unearthed. The first was an altar stone, carved to look like the Mishkan, the Holy Temple in Jerusalem. One can see the colonnaded facade on the sides as well as a carving of the menorah that stood at the entrance. Also depicted were special brushes that the high priest would use to clean the altar, carvings of jars of holy oil, the show bread, and on the back wheels and fire which represented both the opening verses of the book Ezekiel and the presence of G-d in that place. It was the only representation of the Second Temple ever found. The other exciting discovery was a stone on which the Torah scrolls were places. The top of the stone is completely flat except for two parallel divots at each end where the rolls of the Torah would be laid for facility of reading. Anyone who has ever read from a Torah in synagogue can tell you what a pain it is to roll out and read on a slanted bimah/dais. 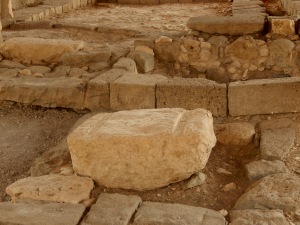 Stone where Torah scroll was unrolled 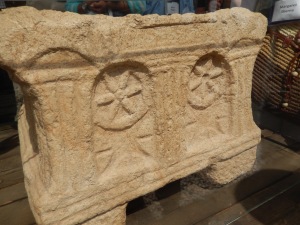 Another exciting fact was that in this synagogue there was no separation of men and women. All sexes sat together to hear the teachings until after the Diaspora, the Roman destruction of the Temple in Jerusalem and the scattering of the Jewish people throughout the world. The separation happened somewhere in the 4th Century. After the synagogue was discovered, the town of Magdala itself was unearthed with homes, several mikvot (ritual baths) fed by underwater springs, the main Cardo or street where the fisherman would cure their fish before sending it to markets all over the Roman Empire, and the port itself on the shores of the Galilee. Every day, groups of volunteers work to uncover more of this exciting city. Fr. Solana of the Legion of Christ, has already completed an impressive Church with the altar in the shape of a first century fishing vessel. The whole church overlooks the Sea of Galilee, and the altar/boat appears to be floating on the water.

Unique and lovely Church on the Galilee

After this, we were treated to a wonderfully cool and refreshing boat ride on the Kinneret (Sea of Galilee). We had great views of many of the Holy Sites, as well as Tiberius, the large city on the Southwestern side, the Golan Heights to the East, and the rolling hills of the Galilee to the North and West. Besides catching up with our friends on local news, the high points included a flag raising ceremony of both the Israel and US flags ( I must admit I was totally in tears at the time), and then a brief Israeli folk dancing lesson, where the women formed a circle (on the sailing boat!!) and danced the hora.

How good it was to be together again!!!

My good friend, Angelique & Me

We spent the rest of the day touring important Christian and Jewish sites on the Galilee (you can drive around the whole lake in just 50 minutes it’s that small), and having the best of times. It was the most gorgeous day – thank you, G-d for the breeze – and thank you Fr. Dave Heney for letting our family tag along! We hope to see you all again soon.

After a brief respite, and another couple class days, we had another family from America visit us. Thank you for all the wonderful presents from home, folks!! And we took another field trip – to Caeasaria, one of my favorite spots in Israel. Our early morning started with a trip to the beach – one of the most beautiful in the world, with the warm, azure blue waters of the Mediterranean and an ancient Roman aquaduct as the backdrop to this pristine place, surprisingly empty of beachgoers. The kids had a delightful time swimming and searching for shells and beach glass, and we adults had a restful morning together. 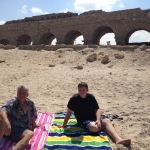 The rest of the day was spent exploring more ancient ruins: a complete Roman Amphitheater; an architectural graveyard with hundreds of lintels, columns, statues just laying in a field; the ruins of an old Roman villa on the Sea; the hippodrome (where was Charleton Heston???) and the town itself. Caesaria has over a mile of layers and layers of Roman, Jewish, early Christian, Muslim, and Crusader ruins. The shear size and scope is unbelievable with beautiful mosaic floors, and well preserved houses, businesses, and halls. It was one of the most fun-filled days, and we absolutely hated to part with all the friends that visited us in the past week. We miss them dearly already, and are left with a bit of homesickness as we prepare to start our next week of school tomorrow.

Ruins of the Villa

Roman Hippodrome by the Sea

2 thoughts on “Field Trips and Friends”