The Night of Fire

A few days after Passover, we began to see kids with shopping carts full of wood roaming the streets. Over the next couple weeks they grew more prevalent. Kids of all ages schlepping wheelbarrows full of pallets; kids scouting the neighborhoods and building sites for odd pieces and scraps of timber – it seemed an obsession. What in the world???? They were all getting ready for the Lag B’Omer holiday – a day we never celebrated in America. First of all, free-range kids are almost an obscenity in California – as are bonfires. No, no, no. This sort of thing would never be allowed. But we are no longer in the States, and this was a completely new experience – one that I had heard of from my Israeli-American friends, Bilha and Nurit. They used to speak of it with a warm glow in their eyes: the night of fire.

This festival has ancient roots. On the second day of Passover, Jewish people start the Omer count. The count lasts for 50 days until the pilgrimage feast of Shavuot (the Hellenistic Greek Jews called it Pentecost). Basically, it’s a count of an Omer (ancient measurement) of barley which was cut and brought into the Temple in Jerusalem as an offering. Even today, all over the world, Jews continue the practice of saying a prayer and counting the “Omer” each evening. Lag B’Omer is the 33rd day of the count, a day of spiritual significance. On this day, in the 2nd century, Rabbi Shimon bar Yochai (Rashbi), died. He was a well-known mystic and miracle worker from the Sfat area about 10 minutes from Karmi’el. Many people here regard him as the founder of the Kabbalah movement. Remembering him as a great and wise sage, this festival marks the spiritual light he was to the Hassidic community. Other Jews celebrate this festival in celebration of the spiritual light G-d has implanted in the heart of every living being, but most kids see this as a time to have a huge party. School gets out at noon, and all over the city – in vacant lots, in parks, anywhere there is a small semblance of a clearing – stones circles appear and the planks start going up.

We were invited to one bonfire in particular – we never did find it!!! – and John, Max, and I started out around 6pm. Everywhere we went, we passed kids, families, school groups, synagogue groups erecting their wood teepee skeletons, some small and sloppy, others huge and beautiful masterpieces for the night to come. As the sun sank lower, the fires began to be kindled one by one. We walked about two miles from group to group, stopping to enjoy the music and the dancing. As it got darker, the flames grew higher and more numerous. Families were roasting hotdogs and marshmallows. Most wrapped up potatoes and corn and laid them on the edges of their fires. It was a pyromaniac’s dream come true!!! We honestly didn’t know how brush fires didn’t break out (I guess we’d been in California too long) – but at times it seemed almost dangerous as sparks went leaping into the sky, carries by gusts of wind. In one lot alone, we counted 19 separate bonfires (medurote)!!! It was great fun, and quite joyous.

When the Roman Empire occupied Israel, they forbid the lighting of beacon fires. In ancient times these sentinels were very important. The bonfires would be lit on the mountaintops to tell of the new month or imminent religious holiday. They would also be warning fires, signals of invaders. So having the freedom to kindle these fires is a remembrance of what was and what is. Living here is a continual reminder that we are links in a chain of history that connects us to a time long, long ago.

When we walked home around 10 o’clock, the fires were still going strong, and guitars and drums and singing could be heard for hours after. The moms had taken the little ones home to bed, but the older children, teens, young adults, and even older folk continue to celebrate until way past midnight. It was a night of stories, folk dancing, singing, food, fun, and memories. 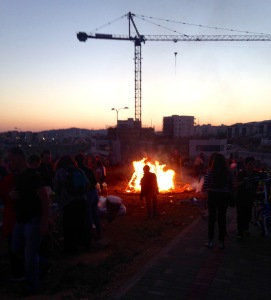 4 thoughts on “The Night of Fire”